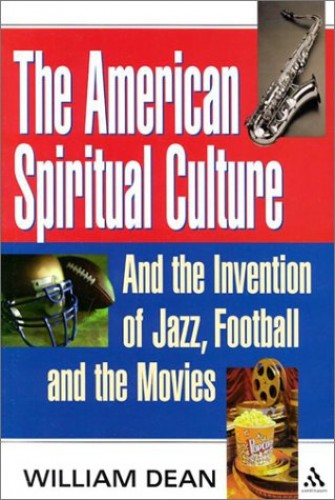 In Stock
£5.99
William Dean describes the spiritual culture that is grounded in the emerging American story. He also explores the concept of God (or the "Ultimate") that is central to that story - a concept that is reflected in contemporary American culture, including popular culture.
Very Good
Only 1 left

The American Spiritual Culture: And the Invention of Jazz, Football and the Movies by William Dean

Americans are perhaps the most openly and energetically religious of all the peoples among the developed nations. Americans are religious in all the obvious ways, belonging to churches, synagogues and mosques, as well as nurturing private spiritualities. But they are religious also in public ways, aiming to find a standard large enough to frame their common life and to judge them and their country. In this book, William Dean describes the spiritual culture that is grounded in the emerging American story. He also explores the concept of God (or the "Ultimate") that is central to that story - a concept that is reflected in contemporary American culture, including popular culture. The first part of the book argues that Americans are a pragmatic, culturally displaced, immigrant people and teases out the meaning of this description for a concept of God that is theologically and religiously adequate - pragmatic yet attentive to both tradition and mystery. In the second half of the book, the author verifies his analysis by examining three quintessential American popular cultural forms, which he would argue are forms of religious expressions. They are jazz (improvisation), football (violence) and the movies (fantasy).

"William Dean s splendid meditation on the spiritual character of American society is a distinctive and important contribution to the theology of culture. Like Sidney Mead and Robert Be+llah, he believes that American society is replete with spiritual meaning, but Dean writes as a theologian. Like Paul Tillich, he believes that religion is crucially constitutive in culture, but Dean is a pragmatic historicist who rejects Tillich s transcendental idea of God. Perceptive and engaging."
Gary Dorrien, Parfet Distinguished Professor at Kalamazoo College and author of The Making of American Liberal Theology
"Who is God and what has God to do with Americans? Hard questions. But William Dean has explored them with insight and originality, opening up ways of thinking that had seemed closed and looking for light in places most scholars of religion would never look: jazz, football, and the movies. This is an intensely readable book that should reach a large audience of scholars and lay people alike."
Robert Bellah, Professor of Sociology, Emeritus, University of California, Berkeley and coauthor of Habits of the Heart and The Good Society.
"Dean contributes some valuable insights and new material to the discussion [of the nation's character]"
Commonweal, 5/23/03
"This book is an appropriate text for graduate and undergraduate courses in religion and culture, serving not as an introductory text outlining various methodologies but as an engaging exploration of one approach."
Russell W. Dalton, Religious Studies R

William Dean is Professor of Constructive Theology Emeritus at Iliff School of Theology. He is the author of 5 books and coeditor of another. His previous book, The Religious Critic in American Culture, won an AAR Award for Excellence in the Study of Religion in 1995.

GOR009942902
The American Spiritual Culture: And the Invention of Jazz, Football and the Movies by William Dean
William Dean
Used - Very Good
Hardback
Bloomsbury Publishing PLC
2002-11-28
240
0826414400
9780826414403
N/A
Book picture is for illustrative purposes only, actual binding, cover or edition may vary.
This is a used book - there is no escaping the fact it has been read by someone else and it will show signs of wear and previous use. Overall we expect it to be in very good condition, but if you are not entirely satisfied please get in touch with us.