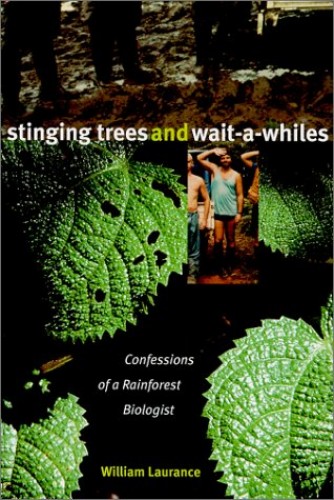 In Stock
£4.49
This work is the author's record of the time he spent in the remote area of the Australian rainforest and his run-ins with plant, animal and human species alike. He found hemself at the centre of a bitter battle over conservation strategies and became the object of many residents' hatred.
Very Good Good
Only 1 left

Stinging Trees and Wait-a-whiles: Confessions of a Rainforest Biologist by William F. Laurance

The last traces of Australia's tropical rainforest, where the southeasterly winds bring rain to the coastal mountains, contain a unique assemblage of plants and animals, some primitive, many that are found nowhere else on earth. And fifteen years ago, they also contained Bill Laurance, a budding ecologist seduced by the nature of the landscape in north Queensland. Laurance isn't your typical scientist: he wears cut-offs instead of white coats, enjoys the occasional food fight, and isn't afraid to speak his mind, even if it gets him into trouble, as it often did in the Australian rainforest and as he recounts in his marvelous Queensland journal Stinging Trees and Wait-a-Whiles.
The book is his record of the time he spent in this remote area and his run-ins with plant, animal, and human species alike. Laurance lived in a tiny town of loggers and farmers, and he witnessed firsthand the impact of conservation issues on individual lives. He found himself at the center of a bitter battle over conservation strategies and became not only the subject of small-town gossip but also the object of many residents' hatred. Keeping ahead of his high-spirited young volunteers, hounded by the drug-sniffing local policeman, and all the while trying to further his own research amid natural and unnatural obstacles, Laurance offers us a personal and hilarious account of fieldwork and life in the Australian outpost of Millaa Millaa. Stinging Trees and Wait-a-Whiles is a biology lesson, a conservation primer, and an utterly energetic story about an impressionable young man who wound up at the epicenter of an issue that tore a small town apart.

William Laurance is a senior research scientist with the Smithsonian Institution and Brazil's National Institute for Amazonian Research. The recipient of the American Society of Mammalogists Award for his work on tropical forest fragmentation, he is the lead editor of Tropical Forest Remnants.

GOR004783661
Stinging Trees and Wait-a-whiles: Confessions of a Rainforest Biologist by William F. Laurance
William F. Laurance
Used - Very Good
Hardback
The University of Chicago Press
2000-10-02
196
0226468968
9780226468969
N/A
Book picture is for illustrative purposes only, actual binding, cover or edition may vary.
This is a used book - there is no escaping the fact it has been read by someone else and it will show signs of wear and previous use. Overall we expect it to be in very good condition, but if you are not entirely satisfied please get in touch with us.