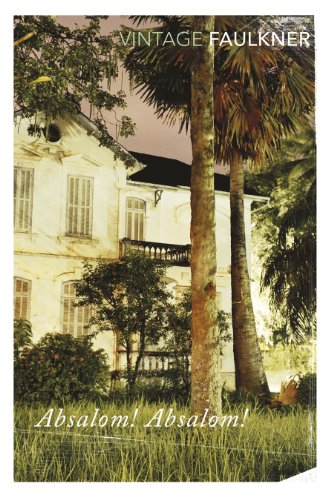 This postbellum Greek tragedy is the perfect introduction to Faulkner's elaborate descriptive syntax.

Quentin Compson and Shreve, his Harvard roommate, are obsessed with the tragic rise and fall of Thomas Sutpen. As a poor white boy, Sutpen was turned away from a plantation owner's mansion by a black butler.

This postbellum Greek tragedy is the perfect introduction to Faulkner's elaborate descriptive syntax.

Quentin Compson and Shreve, his Harvard roommate, are obsessed with the tragic rise and fall of Thomas Sutpen. As a poor white boy, Sutpen was turned away from a plantation owner's mansion by a black butler. From then on, he was determined to force his way into the upper echelons of Southern society. His relentless will ensures his ambitions are soon realised; land, marriage, children, his own troop to fight in the Civil War... but Sutpen returns from the conflict to find his estate in ruins and his family collapsing. Secrets from his own past threaten to ruin the lives of his children and destroy everything he has worked for.

The novel in which Faulkner most profoundly and completely says what he has to say about the South and the human condition -- Walter Allen
For range of effect, philosophical weight, originality of style, variety of characterisation, humour and tragic intensity [Faulkner's Works] are without equal in our time and country -- Robert Penn Warren
For all his concern with the South, Faulkner was actually seeking out the nature of man. Thus we must turn to him for that continuity of moral purpose which made which made for the greatness of our classics -- Ralph Ellison
The magnitude of Faulkner's characters lies in their blood and bone and sinew: the exquisite specificity of their human fallibility... Faulkner seemed incapable of separating intimate character from universal truth, and this rough refusal - both humble and defiant - was at the root of his force as a writer... No other American writer has achieved such staggering heights of form * Boston Globe *
Heart-pinching * New York Times *

Born in 1897 in New Albany, Mississippi, William Faulkner was the son of a family proud of their prominent role in the history of the south. He grew up in Oxford, Mississippi, and left high school at fifteen to work in his grandfather's bank. Rejected by the US military in 1915, he joined the Canadian flyers with the RAF, but was still in training when the war ended. Returning home he studied at the University of Mississippi and visited Europe briefly in 1925. His first poem was published in The New Republic in 1919. His first book of verse and early novels followed, but his major work began with the publication of The Sound and the Fury in 1929. As I Lay Dying (1930), Sanctuary (1931), Light in August (1932), Absalom, Absalom! (1936) and The Wild Palms (1939) are the key works of his great creative period leading up to Intruder in the Dust (1948). During the 1930s, he worked in Hollywood on film scripts, notably The Blue Lamp, co-written with Raymond Chandler.
William Faulkner was awarded the Nobel Prize for Literature in 1949 and the Pulitzer Prize for The Reivers just before his death in July 1962.

GOR010292788
Absalom, Absalom! by William Faulkner
William Faulkner
Used - Like New
Paperback
Vintage Publishing
1995-01-19
384
0099475111
9780099475118
N/A
Book picture is for illustrative purposes only, actual binding, cover or edition may vary.
The book has been read, but looks new. The book cover has no visible wear, and the dust jacket is included if applicable. No missing or damaged pages, no tears, possible very minimal creasing, no underlining or highlighting of text, and no writing in the margins.