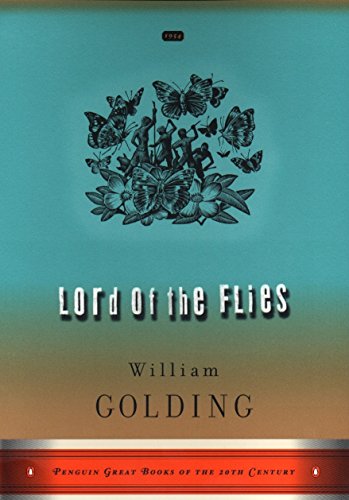 Lord of the Flies by William Golding

Lord of the Flies: (Penguin Great Books of the 20th Century) by William Golding

Lord of the Flies remains as provocative today as when it was first published in 1954, igniting passionate debate with its startling, brutal portrait of human nature. Though critically acclaimed, it was largely ignored upon its initial publication. Yet soon it became a cult favorite among both students and literary critics who compared it to J.D. Salinger's The Catcher in the Rye in its influence on modern thought and literature.

William Golding's compelling story about a group of very ordinary small boys marooned on a coral island has become a modern classic. At first it seems as though it is all going to be great fun; but the fun before long becomes furious and life on the island turns into a nightmare of panic and death. As ordinary standards of behaviour collapse, the whole world the boys know collapses with them-the world of cricket and homework and adventure stories-and another world is revealed beneath, primitive and terrible.Labeled a parable, an allegory, a myth, a morality tale, a parody, a political treatise, even a vision of the apocalypse, Lord of the Flies has established itself as a true classic.

Lord of the Flies is one of my favorite books. That was a big influence on me as a teenager, I still read it every couple of years.
-Suzanne Collins, author of The Hunger Games

As exciting, relevant, and thought-provoking now as it was when Golding published it in 1954.
-Stephen King

Lord of the Flies is one of my favorite books. That was a big influence on me as a teenager, I still read it every couple of years.
-Suzanne Collins, author of The Hunger Games

As exciting, relevant, and thought-provoking now as it was when Golding published it in 1954.
-Stephen King

The most influential novel...since Salinger's Catcher in the Rye.
-Time

This brilliant work is a frightening parody on man's return (in a few weeks) to that state of darkness from which it took him thousands of years to emerge. Fully to succeed, a fantasy must approach very close to reality. Lord of the Flies does. It must also be superbly written. It is.
-The New York Times Book Review

Sparely and elegantly written...Lord of the Flies is a grim anti-pastoral in which adults are disguised as children who replicate the worst of their elders' heritage of ignorance, violence, and warfare.
-Joyce Carol Oates, New York Review of Books
Born in Cornwall, England, in 1911 and educated at Oxford University, William Gerald Golding's first book, Poems, was published in 1935. Following a stint in the Royal Navy and other diversions during and after World War II, Golding wrote Lord of the Flies while teaching school. This was the first of several novels including Pincher Martin, Free Fall, and The Inheritors and a play, The Brass Butterfly, which led to his being awarded the Nobel Prize for Literature in 1983.
Lord Of The FliesOne: The Sound Of The Shell

Two: Fire On The Mountain

Three: Huts On The Beach

Eight: Gift For The Darkness

Nine: A View To A Death

Ten: The Shell And The Glasses

Twelve: Cry Of The Hunters

GOR003542030
9780140283334
0140283331
Lord of the Flies: (Penguin Great Books of the 20th Century) by William Golding
William Golding
Used - Very Good
Paperback
Penguin Putnam Inc
19991001
192
null null null null null null null null null null
Book picture is for illustrative purposes only, actual binding, cover or edition may vary.
This is a used book - there is no escaping the fact it has been read by someone else and it will show signs of wear and previous use. Overall we expect it to be in very good condition, but if you are not entirely satisfied please get in touch with us
Trustpilot