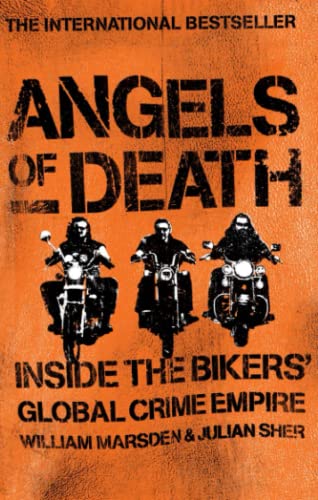 Angels of Death: Inside the Bikers' Global Crime Empire
by William Marsden

A terrifying journey to the criminal heart of the Hell's Angels motorcycle club - the most infamous biker group in the world.

'Brilliant and highly readable ... an investigative tour-de-force. This is the first book to lift the lid on the real Hells' Angels.' TONY THOMPSON, author of the bestselling GANGS

Angels of Death: Inside the Bikers' Global Crime Empire Summary

Angels of Death: Inside the Bikers' Global Crime Empire by William Marsden

The Hell's Angels leader, Sonny Barger, is toasted as an American legend, and the bikers work hard to promote their folk-hero image.

But the facts tell another story. The Hell's Angels are America's major crime export. Their membership has spread to 25 countries including the UK, Australia and Holland, where they have inspired a violent subculture of biker gangs who traffick drugs and suppress any attempt to stop them.

ANGELS OF DEATH opens at the darkest moment of the Hell's Angels story, with the beheading of a woman at a chapter meeting. It tells the true story of the bikers, their crime empire and the attempt of the police to stop them - with only a few successes.

With eyewitness accounts from police officers who have infiltrated the gangs and gang members who have turned informers, and undercover interviews with the bikers themselves, this is a chilling insight into the world's fastest growing crime empire.

N.B. Also includes exclusive material from the leaders of the Hells Angels - Sonny Barger and George Christie - who have agreed to be interviewed for the book.

Angels of Death: Inside the Bikers' Global Crime Empire Reviews

'This is a fascinating and disturbing study of a group of macho outsiders in the modern world. There is a terrific movie just waiting to be made out of this book.' * Daily Mail *
'Frightening stuff ... a virtual anthology of badness; 452 pages of documented murder and mayhem perpetrated by the worst of the worst.' * Sun Herald *
A true crime book that reads like a fiction thriller * Canadian Press on THE ROAD TO HELL by Marsden and Sher *

Julian Sher and William Marsden are investigative journalists, based in Canada. Their previous book, THE ROAD TO HELL (Knopf 2003) was a number one in Canada. It also won the Arthur Ellis Award for Best True Crime 2004 and was shortlisted for the Writers' Trust of Canada's Shaughnessy Cohen Prize for Political Writing.

GOR001115452
Angels of Death: Inside the Bikers' Global Crime Empire by William Marsden
William Marsden
Used - Very Good
Paperback
Hodder & Stoughton General Division
2007-05-31
480
034089833X
9780340898338
N/A
Book picture is for illustrative purposes only, actual binding, cover or edition may vary.
This is a used book - there is no escaping the fact it has been read by someone else and it will show signs of wear and previous use. Overall we expect it to be in very good condition, but if you are not entirely satisfied please get in touch with us.