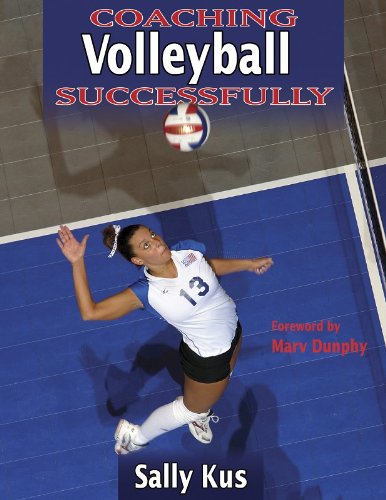 In Stock
£16.99
Coaching Volleyball Successfully provides everything a volleyball coach needs to build and coach a successful team; from underlying philosophy to game-specific preparation and tactics.
Very Good Good
Only 1 left

""""Sally Kus is one of the top instructors in USA Volleyball's coaching accreditation program. Coaches at every level will give their players a far better athletic experience on and off the court if they learn from the ideas in this book."""
John Kessel
Coaching education director, USA Volleyball
""""Coaching Volleyball Successfully "is a must-read that explores the elements that have brought success to Sally and her athletes. These gems of wisdom come from the former coach of a high school program that set the level of play for which most of us strive."""
Patti Perone
Horseheads High School varsity coach
Southern Tier Volleyball Club coordinator and coach
"""Sally demonstrates why she has been recognized as one of the top high school coaches in the nation. Her skills as a physical educator and her commitment to her players and the game of volleyball shine through in each chapter."""
Russ Rose
Head volleyball coach, Penn State University
"

Sally Kus is the head volleyball coach at the University of Buffalo. Prior to taking over the reins at UB in December of 2001, Kus enjoyed four successful seasons at Daemen College, New York where she was twice named NAIA conference coach of the year. Kus is best known for her remarkable 23 year coaching tenure at Sweet Home High School, New York where she compiled an impressive record. She coached her teams to an American National Federation of State High School record of 292 consecutive wins, six consecutive state titles and a No. 1 ranking by USA Today. Kus was named coach of the year by the American National Women's Sports Foundation in 1983, National Federation Volleyball Coach of the Year in 1987 and was inducted into the US National Volleyball Hall of Fame in 1996.

GOR003654825
Coaching Volleyball Successfully by William Neville
William Neville
Used - Very Good
Paperback
Human Kinetics Publishers
2004-04-30
224
0736040374
9780736040372
N/A
Book picture is for illustrative purposes only, actual binding, cover or edition may vary.
This is a used book - there is no escaping the fact it has been read by someone else and it will show signs of wear and previous use. Overall we expect it to be in very good condition, but if you are not entirely satisfied please get in touch with us.