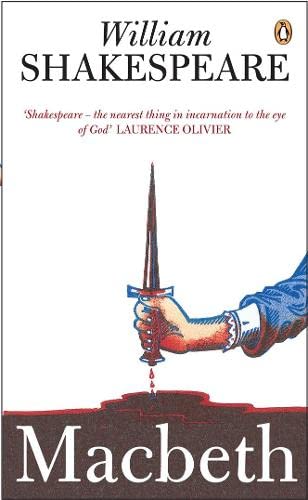 In Stock
£3,99
Promised a golden future as ruler of Scotland by three sinister witches, Macbeth murders the king to ensure his ambitions come true. But he soon learns the meaning of terror killing once, he must kill again and again, and the dead return to haunt him.
Very Good
13 in stock

Referred to by superstitious actors as 'the Scottish play', William Shakespeare's Macbeth is a tragedy whose appalling earthly crimes have lasting supernatural repercussions. This Penguin Shakespeare edition is edited by George Hunter with an introduction by Carol Rutter. 'By the pricking of my thumbs, Something wicked this way comes' Promised a golden future as ruler of Scotland by three sinister witches, and spurred on by his wife, Macbeth murders King Duncan to ensure his ambitions come true. But he soon learns the meaning of terror - killing once, he must kill again and again, and the dead return to haunt him. A story of war, witchcraft and bloodshed, Macbeth also depicts the relationship between husbands and wives, and the risks they are prepared to take to achieve their desires. This book contains a general introduction to Shakespeare's life and Elizabethan theatre, a separate introduction to Macbeth, a chronology, suggestions for further reading, an essay discussing performance options on both stage and screen, and a commentary. William Shakespeare (1564-1616) was born to John Shakespeare and Mary Arden some time in late April 1564 in Stratford-upon-Avon. He wrote about 38 plays (the precise number is uncertain), many of which are regarded as the most exceptional works of drama ever produced, including Romeo and Juliet (1595), Henry V (1599), Hamlet (1601), Othello (1604), King Lear (1606) and Macbeth (1606), as well as a collection of 154 sonnets, which number among the most profound and influential love-poetry in English. If you enjoyed Macbeth, you might like Hamlet, also available in Penguin Shakespeare. 'Shakespeare - the nearest thing in incarnation to the eye of God' Lawrence Olivier

"I "highly recommend" Campfire's comics. They do what they are intended to do and do it in a way that excites kids about classic literature."

-- Chris Wilson, The Graphic Classroom (a resource for teachers and librarians)

William Shakespeare (1564-1616) was born to John Shakespeare and mother Mary Arden some time in late April 1564 in Stratford-upon-Avon. He wrote about 38 plays (the precise number is uncertain), a collection of sonnets and a variety of other poems. Stanley Wells is Emeritus Professor of the University of Birmingham and Chairman of the Shakespeare Birthplace Trust. Carol Rutter teaches English And Comparative Literature and is Co-Director of Graduate Studies at the Centre for Renaissance Studies at Warwick University. Her publications include Enter the Body: Women and Representation on Shakespeare's Stage and Documents of the Rose Playhouse (MUP, 1999). George K Hunter is Emily Sanford Professor of English Emeritus at Yale University. His books include John Lyly: The Humanist as Courtier, Dramatic Identities and Cultural Tradition, English Drama 1586-1642: the Age of Shakespeare (Oxford History of English Literature Vol.6).

GOR001396963
Macbeth by William Shakespeare
William Shakespeare
Used - Very Good
Paperback
Penguin Books Ltd
2005-04-07
256
0141013699
9780141013695
N/A
Book picture is for illustrative purposes only, actual binding, cover or edition may vary.
This is a used book - there is no escaping the fact it has been read by someone else and it will show signs of wear and previous use. Overall we expect it to be in very good condition, but if you are not entirely satisfied please get in touch with us.