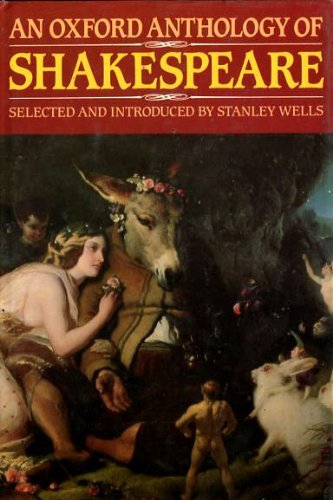 In Stock
£4.99
This anthology contains some 200 of the finest examples of Shakespeare's literary genius, varying from a few lines to complete scenes. The text is from "The Oxford Shakespeare", and includes introduction, notes, glossary, and index of plays.
Very Good
Only 1 left

An Oxford Anthology of Shakespeare Summary

In this elegantly-crafted anthology, readers have at their fingertips over two hundred of the finest examples of Shakespeare's work, ranging from two-line aphorisms, to sonnets, to complete scenes. Ideal for browsing, it allows readers to revisit favorite passages--Hamlet's soliloquy, the balcony scene from Romeo and Juliet--or to discover unfamiliar gems. Above all, it permits readers to savor Shakespeare's unequalled capacity to portray the peaks and valleys of human experience.
Here readers will rediscover Shakespeare's extraordinary ability to capture in words the hearts, minds, and imaginations of kings and peasants, wise men and fools, warriors and page-boys, statesmen and common thieves. And hear quintessential expressions of admiration and vituperation, villainy and virtue, grief, joy, and despair. It is unlikely that a selection from the work of any other writer could represent so wide a range of human experience.
In creating this anthology, Stanley Wells--the General Editor of the Oxford Shakespeare--has tried to select those passages that are most attractive in their own right and that suffer least from being read out of context. For the reader's convenience, he has arranged the excerpts according to subject matter, under headings such as Friendship, Love, Hatred, Responsibility and Government, Time, Wisdom and Folly, and Death. For readers looking for a particular quotation, there is also a play-by-play index.
Highlighted by some of the most memorable and moving moments in world literature, this anthology is also a masterpiece of craftsmenship, with exquisite endpapers, excellent typography, and high quality paper. It is a perfect gift for the aficionado of Shakespeare or for anyone who loves fine writing.

GOR002815113
An Oxford Anthology of Shakespeare by William Shakespeare
William Shakespeare
Used - Very Good
Hardback
Oxford University Press
1987-10-15
416
0198129351
9780198129356
N/A
Book picture is for illustrative purposes only, actual binding, cover or edition may vary.
This is a used book - there is no escaping the fact it has been read by someone else and it will show signs of wear and previous use. Overall we expect it to be in very good condition, but if you are not entirely satisfied please get in touch with us.