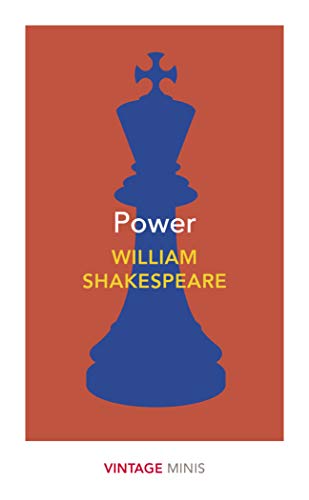 'Why, what is pomp, rule, reign, but earth and dust?
And, live we how we can, yet die we must'

What is the true meaning of power? Are some simply born to it or can it be acquired like a skill? Does it always breed corruption and greed or can it be a force for good? From kings to prisoners and from battle-fields to courts, Shakespeare's peerless understanding of power and its repercussions remains as pertinent today as it has ever been.

William Shakespeare was born in Stratford-upon-Avon in Warwickshire, and was baptised on 26 April 1564. His father was a glove maker and wool merchant and his mother, Mary Arden, was the daughter of a well-to-do local land owner. Shakespeare was probably educated in Stratford's grammar school. In 1582 he married Anne Hathaway, and the couple had a daughter the following year and twins in 1585.

Shakespeare's theatrical life seems to have commenced around 1590. We do know that he was part of the Lord Chamberlain's Company, which was renamed the King's Company in 1603 when James I succeeded to the throne. The Company acquired interests in two theatres in the Southwark area of London, near the banks of the Thames - the Globe and the Blackfriars.

Shakespeare's poetry was published before his plays, with two poems appearing in 1593 and 1594, dedicated to his patron Henry Wriothesley, Earl of Southampton. Most of Shakespeare's sonnets were probably written at this time as well.

Records of Shakespeare's plays begin to appear in 1594, and he produced roughly two a year until around 1611. His earliest plays include Henry VI and Titus Andronicus. A Midsummer Night's Dream, The Merchant of Venice and Richard II all date from the mid to late 1590s. Some of his most famous tragedies were written in the early 1600s; these include Hamlet, Othello, King Lear, Macbeth and Antony & Cleopatra. His late plays, often known as the Romances, date from 1608 onwards and include The Tempest.

Shakespeare died on 23 April 1616 and was buried in Holy Trinity Church in Stratford. The first collected edition of his works was published in 1623 and is known as 'the First Folio'.

NGR9781784876098
Power: Vintage Minis by William Shakespeare
William Shakespeare
Vintage Minis
New
Paperback
Vintage Publishing
2020-03-03
144
1784876097
9781784876098
N/A
Book picture is for illustrative purposes only, actual binding, cover or edition may vary.
This is a new book - be the first to read this copy. With untouched pages and a perfect binding, your brand new copy is ready to be opened for the first time.