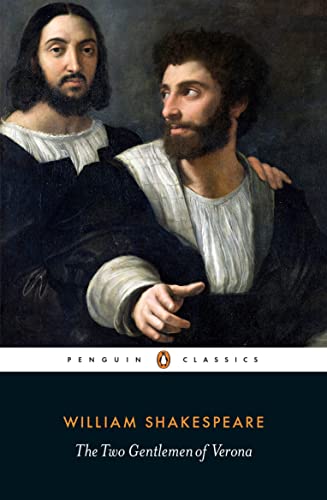 The Two Gentlemen of Verona
by William Shakespeare

In Stock
£3.59
Leaving behind both home and beloved, a young man travels to Milan to meet his closest friend. Once there, however, he falls in love with his friend's new sweetheart and resolves to seduce her.
Very Good Well Read
Only 2 left

The Two Gentlemen of Verona Summary

The Two Gentlemen of Verona by William Shakespeare

An engaging comedy of love, The Two Gentlemen of Verona deals with the conflict between friendship and romance, and features one of Shakespeare's most memorable clowns. This Penguin Shakespeare edition is edited by Norman Sanders with an introduction by Russell Jackson.

Leaving behind both home and beloved, a young man travels to Milan to meet his closest friend. Once there, however, he falls in love with his friend's new sweetheart and resolves to seduce her. Love-crazed and desperate, he is soon moved to commit cynical acts of betrayal, revealing how passion can prove more powerful than even the strongest loyalty owed to a friend.

This book contains a general introduction to Shakespeare's life and Elizabethan theatre, a separate introduction to the play, a chronology, suggestions for further reading, an essay discussing performance options on both stage and screen, and a commentary.

The Two Gentlemen of Verona Reviews

"A remarkable edition, one that makes Shakespeare's extraordinary accomplishment more vivid than ever."--James Shapiro, professor, Columbia University, bestselling author of A Year in the Life of Shakespeare: 1599

"A feast of literary and historical information."--The Wall Street Journal

William Shakespeare was born in late April 1564 in Stratford-upon-Avon and died in 1616. He is widely regarded as the greatest writer in the English language and the world's pre-eminent dramatist.

Stanley Wells is Emeritus Professor of the University of Birmingham and Honorary President of the Shakespeare Birthplace Trust.

Norman Sanders was Professor of Shakespeare at the University of Tennessee.

GOR008226236
The Two Gentlemen of Verona by William Shakespeare
William Shakespeare
Used - Very Good
Paperback
Penguin Books Ltd
2015-11-26
240
0141396423
9780141396422
N/A
Book picture is for illustrative purposes only, actual binding, cover or edition may vary.
This is a used book - there is no escaping the fact it has been read by someone else and it will show signs of wear and previous use. Overall we expect it to be in very good condition, but if you are not entirely satisfied please get in touch with us.