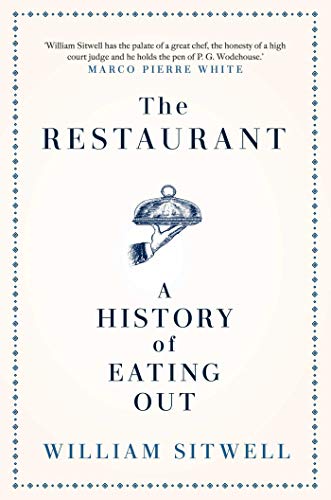 The Restaurant
by William Sitwell

In Stock
£19.99
From the witty pen of renowned food critic William Sitwell comes a dazzling history of eating out.
New£19.99
5 in stock

The Restaurant: A History of Eating Out by William Sitwell

AS READ ON BBC RADIO 4 BOOK OF THE WEEK.
The fascinating story of how we have gone out to eat, from the ancient Romans in Pompeii to the luxurious Michelin-starred restaurants of today.

Tracing its earliest incarnations in the city of Pompeii, where Sitwell is stunned by the sophistication of the dining scene, this is a romp through history as we meet the characters and discover the events that shape the way we eat today. Sitwell, restaurant critic for the Daily Telegraph and famous for his acerbic criticisms on the hit BBC show MasterChef, tackles this enormous subject with his typical wit and precision. He spies influences from an ancient traveller of the Muslim world, revels in the unintended consequences for nascent fine dining of the French Revolution, reveals in full hideous glory the post-Second World War dining scene in the UK and fathoms the birth of sensitive gastronomy in the US counterculture of the 1960s.

This is a story of the ingenuity of the human race as individuals endeavour to do that most fundamental of things: to feed people. It is a story of art, politics, revolution, desperate need and decadent pleasure. Sitwell, a familiar face in the UK and a figure known for the controversy he attracts, provides anyone who loves to dine out, or who loves history, or who simply loves a good read with an accessible and humorous history. The Restaurant is jam-packed with extraordinary facts; a book to read eagerly from start to finish or to spend glorious moments dipping in to.

It may be William Sitwell's History of Eating Out, but it's also the definitive story of one of the cornerstones of our culture.

'Fascinating and often counterintuitive' -- Michael Hodges * Radio Times *
'William Sitwell has the palate of a great chef, the honesty of a high court judge and he holds the pen of P.G.Wodehouse' -- Marco Pierre White
'A warm-hearted romp through the history of eating out... This wide-ranging literary feast is particularly apposite at a time when many of us are noticing how much money we're saving by not eating out.' -- Ysenda Maxtone Graham * The Times *
'As tales of saucepan-throwing, cocaine-snorting chefs attest, restaurants revel in drama and excitement... Always well-informed, never dull.' -- Andrew Lycett * Mail on Sunday *
'An immensely engaging guide ... Sitwell never takes himself too seriously. As Dr Johnson declared, "There is nothing... by which so much happiness is produced, as by a good tavern or inn," and it is bittersweet to enjoy it here vicariously.' -- Robert Eustace * Daily Telegraph *
'Beautifully timed to keep your favourite dishes fresh in your mind and get you planning for how and where you're going to indulge when the lockdown finally ends... About as close as you can get to the fun of eating out right now. Sitwell is a witty writer who understands the need to entertain... I found this book more entertaining than many a restaurant meal and it's something to keep us going until everything reopens.' -- Richard Vines * Bloomberg *
'The Restaurant: A History of Eating Out is a story of life. A must read for anyone interested in food or history.' * SLMAG *
'Supremely readable' -- Annie Gray * Spectator *

William Sitwell is one of Britain's leading food writers. He is restaurant critic for The Telegraph, a frequent presenter and guest on TV and radio and one of the long-standing critics on the hit BBC show MasterChef. He also entertains diners with William Sitwell's Supper Club, providing exceptional food in extraordinary locations. www.williamsitwell.com