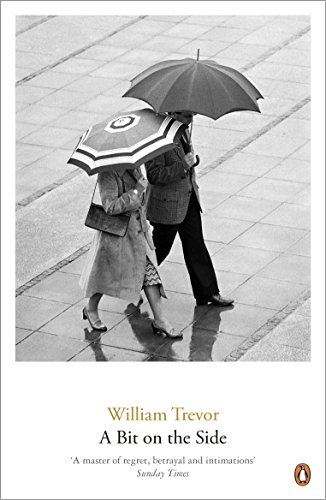 A Bit on the Side
by William Trevor

In Stock
£6.49
A title in which, a waiter divulges a shocking life of crime to his ex-wife; a woman repeats the story of her parents' unstable marriage after a horrible tragedy; a schoolgirl regrets gossiping about the cuckolded man who tutors her; and, a middle-aged accountant offers his reasons for ending a love affair.
Very Good Good Well Read
5 in stock

A Bit on the Side Summary

A Bit on the Side by William Trevor

William Trevor is truly a Chekhov for our age. In these twelve stories, a waiter divulges a shocking life of crime to his ex-wife; a woman repeats the story of her parents' unstable marriage after a horrible tragedy; a schoolgirl regrets gossiping about the cuckolded man who tutors her; and, in the volume's title story, a middle-aged accountant offers his reasons for ending a love affair. At the heart of this stunning collection is Trevor's characteristic tenderness and unflinching eye for both the humanizing and dehumanizing aspects of modern urban and rural life.

If you enjoyed The Story of Lucy Gault and Love and Summer, you will love this book. It will also be adored by readers of Colm Toibin, George Saunders and James Joyce.

'A treat ... each meditate[s] on the subject of love - adulterous, unspoken, clandestine, sometimes cruel. Whether set in rural Ireland or London, their pages whisper of relished secrets and dreams foolishly clung to' Mail on Sunday

A Bit on the Side Reviews

"Reading the Irish writer William Trevor is like drinking cool water when you are tired. You may think you want something stronger or fizzier than his understated prose and his calm understanding of the human condition; but before long you realise that he is providing the kind of refreshment you really need.... His [10]th volume of short stories shows him at his best.... He holds the attention without any melodrama or cheap tricks."
--"The Sunday Telegraph, April 18, 2004
"Beautiful, spartan prose...His characters are concisely drawn. [They] understand the consolations of sympathy. [This] is a suggestion that lends a human quality to his writing."
--"Saturday Telegraph, April 24, 2004
"Perfectly crafted stories... In his tenth book of stories William Trevor displays a matter-of-fact mastery. His tone and material are distinctive without any striving-it's rare for him to raise his voice.... Trevor keeps his point of view fluid, so that the reader's impressions of a central character can be enriched by other people's.... Trevor has laid claim to a large stretch of human terrain. He must go on exploring it, even at the risk of turning it into a private and increasingly imaginary country. Call it Trevorland."
--"The Observer, April 25, 2004
Praise for William Trevor:
"The greatest living writer in English is an Anglo-Irishman named William Trevor. . . . It might seem presumptuous to speak about Trevor in Shakespearean terms, but he is among the few contemporary writers who warrant the comparison."
--"The Globe and Mail
"One of the pre-eminent writers of his generation. He is arguably the finest story writer from the era that may have seen the form reach itsapex."
--"Toronto Star
"Often spoken of in the same breath as Joyce and Chekhov, Trevor shares both writers' subtlety, and, like them, is able to create distinct and mysterious worlds."
--"National Post
"One of the greatest writers alive."
--"The Chronicle-Herald (Halifax)

"From the Hardcover edition.

"Every story here is a model example of just how much a great writer can reveal in a short space." --Newsweek

"A Bit on the Side is a wonderful book... William Trevor really is the best short story writer alive." --Michael Dirda, The Washington Post

William Trevor was born in Mitchelstown, County Cork. He has written many novels, and has won many prizes including the Hawthornden Prize, the Yorkshire Post Book of the Year Award, and the Whitbread Book of the Year Award. His most recent novel Love and Summer was longlisted for the Booker Prize. He is also a renowned writer of short stories, and his two-volume Collected Stories was published by Viking Penguin in 2009. In 1999 William Trevor received the prestigious David Cohen Literature Prize in recognition of a lifetime's literary achievement, and in 2002 he was knighted for his services to literature.

GOR001179721
A Bit on the Side by William Trevor
William Trevor
Used - Very Good
Paperback
Penguin Books Ltd
2005-05-05
256
0141017090
9780141017099
N/A
Book picture is for illustrative purposes only, actual binding, cover or edition may vary.
This is a used book - there is no escaping the fact it has been read by someone else and it will show signs of wear and previous use. Overall we expect it to be in very good condition, but if you are not entirely satisfied please get in touch with us.