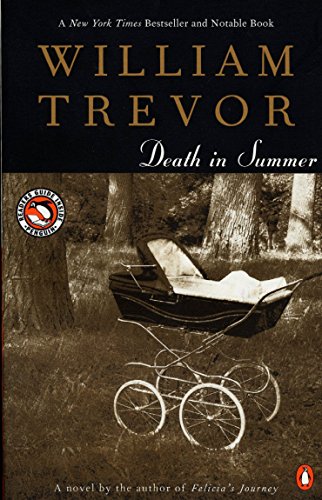 Death In Summer
by William Trevor

In Stock
£3.99
In a dark and atmospheric novel, three tragedies strike one man's household during a stormy summer in the country.
Very Good Good Well Read
5 in stock

Death In Summer by William Trevor

From the winner of the 1999 David Cohen British Literature Prize comes an unforgettably chilling novel, written with the compassion and artistry that define Trevor's fiction.

There were three deaths that summer. The first was Letitia's, sudden and quite unexpected, leaving her husband, Thaddeus, haunted by the details of her last afternoon.

The next death came some weeks later, after Thaddeus's mother-in-law helped him to interview for a nanny to bring up their baby. None of the applicants were suitable--least of all the last one, with her sharp features, her shabby clothes that reeked of cigarettes, her badly typed references--so Letitia's mother moved herself in. But then, just as the household was beginning to settle down, the last of the nannies surprisingly returned, her unwelcome arrival heralding the third of the summer tragedies.

"William Trevor is an extraordinarily mellifluous writer, seemingly incapable of composing an ungraceful sentence. . . . His skill is very real, and equals his great compassion. With Death in Summer, these two qualities combine in a beautiful and resonant way."--The New York Time Book Review

William Trevor was born in Mitchelstown, County Cork. He has written many novels, and has won many prizes including the Hawthornden Prize, the Yorkshire Post Book of the Year Award, and the Whitbread Book of the Year Award. His most recent novel Love and Summer was longlisted for the Booker Prize. He is also a renowned writer of short stories, and his two-volume Collected Stories was published by Viking Penguin in 2009. In 1999 William Trevor received the prestigious David Cohen Literature Prize in recognition of a lifetime's literary achievement, and in 2002 he was knighted for his services to literature.

GOR003549266
Death In Summer by William Trevor
William Trevor
Used - Very Good
Paperback
Penguin Books Ltd
1999-12-02
240
0140287825
9780140287820
N/A
Book picture is for illustrative purposes only, actual binding, cover or edition may vary.
This is a used book - there is no escaping the fact it has been read by someone else and it will show signs of wear and previous use. Overall we expect it to be in very good condition, but if you are not entirely satisfied please get in touch with us.