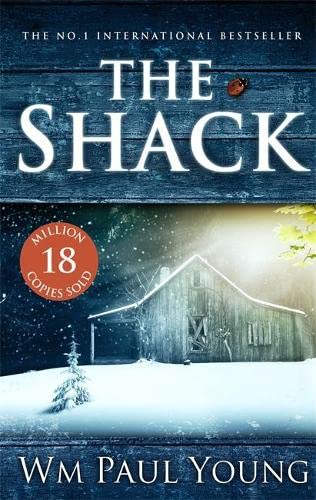 The Shack
by Wm Paul Young

In Stock
£3.29
The powerful bestselling novel of how a grief-stricken man's encounter with God changes his life forever.
Very Good Good Well Read
146 in stock

The Shack by Wm Paul Young

With 18 million copies sold worldwide, THE SHACK is an international bestseller that explores life's toughest questions through the gripping story of one man's struggle to find answers to his suffering.

Mack's youngest daughter, Missy, was abducted during a family vacation and evidence that she may have been brutally murdered is found in an abandoned shack deep in the Oregon wilderness. Four years later, still trapped in his great sadness, Mack receives a suspicious note, apparently from God, inviting him back to that shack. Against his better judgement Mack arrives at the shack on a wintry afternoon. What he finds there will change his life forever.

THE SHACK wrestles with the timeless question, 'Where is God in a world so filled with unspeakable pain?' Mack's experiences when he faces up to his darkest nightmares will astound you, and perhaps transform you as much as it did him.

This is the kind of book you'll want to tell everyone about. Millions have discovered it already - now it's your turn.

'Brilliant! One of the most faith-enhancing books I have ever read' * Bear Grylls *
'Clearly the book is speaking loud and clear to a lot of people' * The Independent *
Bunyanesque ... bold, imaginative, humane and funny. * Church Times *
This book has the potential to do for our generation what John Bunyan's Pilgrim's Progress did for his. It's that good! * Eugene Peterson *
'This is the most heart-warming, inspirational story I have read in decades. If you only read one book in the next year....read THE SHACK' * J.John *
'By far the most captivating, deliciously written and theologically refreshing page turner of a novel I have ever read.' * Gerald Coates, Pioneer *
'Dangerous, dangerous way to do off-the-hook theology, I love it! It's not just what happens when a theologian becomes storyteller: this is what happens when a survivor who has experienced God decides to tell a story. This should be required reading in spirituality/theodicy classes everywhere. The Shack will quickly become a modern classic, and it will inspire imitators. But very few will match the competence of this work.' * Siku *
THE SHACK is the most absorbing work of fiction I've read in many years. My wife and I laughed, cried and repented of our own lack of faith along the way. THE SHACK will leave you craving for the presence of God. * Michael W. Smith, Recording Artist *
This story reads like a prayer - like the best kind of prayer, filled with sweat and wonder and transparency and surprise. If you read one work of fiction this year, let this be it. * Mike Morrell, Zoecarnate.com *
Reading THE SHACK during a very difficult transition in my life, this story has blown the door wide open to my soul. * Wynonna Judd, Recording Artist *

Wm Paul Young was born in Canada but raised among a technologically stone-aged tribe by his missionary parents in the highlands of what was New Guinea. He suffered great loss as a child and young adult, and now enjoys the 'wastefulness of grace' with his family in the US Pacific Northwest.

GOR001204133
The Shack by Wm Paul Young
Wm Paul Young
Used - Very Good
Paperback
Hodder & Stoughton General Division
2008-07-17
256
0340979496
9780340979495
N/A
Book picture is for illustrative purposes only, actual binding, cover or edition may vary.
This is a used book - there is no escaping the fact it has been read by someone else and it will show signs of wear and previous use. Overall we expect it to be in very good condition, but if you are not entirely satisfied please get in touch with us.