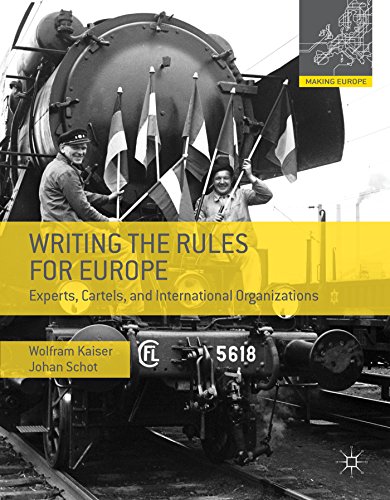 Writing the Rules for Europe
by Wolfram Kaiser

In Stock
£35.99
Drawing on fresh archival evidence, this book tells the story of how experts, cartels and international organizations have written the rules for Europe since around 1850. It shows that the present-day European Union was a latecomer in European integration, which is embedded in a long-term technocratic internationalist tradition.
Very Good
Only 1 left

Writing the Rules for Europe Summary

Writing the Rules for Europe: Experts, Cartels, and International Organizations by Wolfram Kaiser

Drawing on fresh archival evidence, this book tells the story of how experts, cartels and international organizations have written the rules for Europe since around 1850. It shows that the present-day European Union was a latecomer in European integration, which is embedded in a long-term technocratic internationalist tradition.

Writing the Rules for Europe Reviews

"Many studies have been done on Aristide Briand or Walter Rathenau, who led European integration efforts in France and Germany during the interwar year. There are fewer contributions on telecommunication or railway engineers, with a comparable focus on integration. Writing the Rules for Europe provides this rather neglected perspective. It is easy to read, but at the same time offers shrewd insights into the underlying technological structures of European integration, which should be valuable to scholars and the general public alike." (Thomas Hoerber, Journal of Contemporary European Research JCER, Vol. 14 (03), 2018)

"Writing the Rules of Europe provides a 150-year history of the hidden expert-driven integration of Europe, which eventually led the EU to become the most important and contested producer of rules, regulations and systems for transnational interaction in Europe. ... the book connects the history of technology, perspectives from transnational and global history, and European integration history in a way that is refreshing and, for the field of European integration history, absolutely vital." (Haakon A. Ikonomou, European History Quarterly, Vol. 47 (3), July, 2017)

"The book is a guide to the processes which continue to be the hottest topics regarding Western Europe and the European Union itself. ... If you are a historian of science and technology or a scholar of global and international history, you will be fascinated. If you are teaching or studying cultural history, sociology or political science consider this book as part of your reading list. ... it is a book made of steel and worth reading." (Lyubomir Pozharliev, KULT_online - Review Journal for the Study of Culture, Issue 51, July, 2017)

"The book offers an exciting new history of European integration, finding its answers in Europe's long technological trajectories. ... Writing the Rules of Europe is an important new book. In dismantling the political myth of Europe, the authors unearth a long-standing institutional history of competitive, international rule-writing, by expert committees and cartels, that helped link and define Europe technically." (Elisabeth Van Meer, Technology and Culture, Vol. 57 (2), April, 2016)

Wolfram Kaiser is Professor of European Studies at the University of Portsmouth, UK, and Visiting Professor at the College of Europe, Belgium. He has published widely on European integration, Christian democracy and the history of globalisation. His books include (with S. Krankenhagen and K. Poehls) Exhibiting Europe in Museums: Transnational Networks, Collections, Narratives and Representations (2014), (ed. with J.-H. Meyer) Societal Actors in European Integration: Polity-building and Policy-making 1958-92, (ed. with A. Varsori) European Union History: Themes and Debates (Palgrave Macmillan, 2010); Christian Democracy and the Origins of European Union (2007).

Johan Schot is Director of the Science Policy Research Unit and Professor in History of Technology at Sussex University, UK. In 2009 he was elected to the Royal Netherlands Academy of Arts and Sciences (KNAW) for his interdisciplinary work. He has published widely in several fields, including Dutch and European history, innovation studies, and sustainable development. His books include (with John Grin, Jan Rotmans) Transitions Towards Sustainable Development: New Directions in the Study of Long Term Transformative Change (2010), and (ed. with Harry Lintsen and Arie Rip), Technology and the Making of the Netherlands: The Age of Contested Modernization, (2010).

Introduction. - 1. Origins of Technocratic Internationalism. - 2. The Power and Fragility of Experts. - 3. From Divided Europe to 'Core Europe'. - 4. Europe of the Standard Gauge. - 5. Tensions in Railway Europe 6. Canons and Cartels. - 7. Technology Cooperation in Steel Europe. - 8. Towards European Union Hegemony Conclusion

GOR009953075
Writing the Rules for Europe: Experts, Cartels, and International Organizations by Wolfram Kaiser
Wolfram Kaiser
Making Europe
Used - Very Good
Hardback
Palgrave Macmillan
2014-11-19
396
0230308074
9780230308077
N/A
Book picture is for illustrative purposes only, actual binding, cover or edition may vary.
This is a used book - there is no escaping the fact it has been read by someone else and it will show signs of wear and previous use. Overall we expect it to be in very good condition, but if you are not entirely satisfied please get in touch with us.