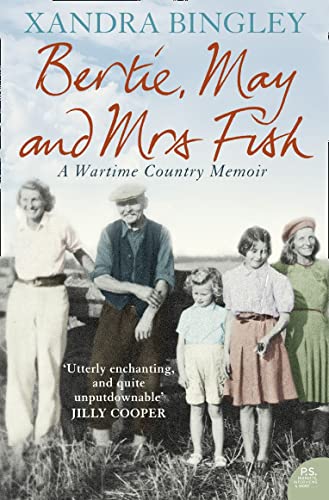 Bertie, May and Mrs Fish by Xandra Bingley

A lyrical, evocative and wonderfully original wartime memoir about life on a farm in the Cotswolds, seen through the eyes of a child.

Bertie, May and Mrs Fish: Country Memories of Wartime by Xandra Bingley

A lyrical, evocative and wonderfully original wartime memoir about life on a farm in the Cotswolds, seen through the eyes of a child.

`Bertie, May and Mrs Fish' is Xandra Bingley's account of her childhood on a Cotswold farm, set against the backdrop of World War II and its aftermath. Bingley's mother is left to farm the land, isolated in the landscape, whilst her husband is away at war. With its eccentric cast of characters, this book captures both the essence of a country childhood and the remarkable courage and resilience displayed by ordinary people during the war. The beauty and sensitivity of Bingley's observation is artfully balanced by the harshness and grit of her reality.

`In the cowshed my mother ties her hair in a topknot scarf that lies on the feedbin lid. At five-thirty each morning and four o'clock in the afternoons she chases rats off the mangers. She measures cowcake and rolled oats and opens the bottom cowshed door. Thirty-one brown and white Ayrshires and one brindle Jersey tramp into their stalls...'

`Two thousand acres. A mile of valley. Horses cattle sheep pigs poultry. Snow above the lintels of the downstairs windows. Her fingers swelling. Chilblains. Her long white kid gloves wrapped around a leaky pipe in her bedroom. Knotted at the fingers. She has a lot to learn and no one to teach her. Accidents happen.'

Bingley tells her tale in a startling voice which captures the universe of a child, the unforgiving landscape and the complicated adult world surrounding her. Her acute observation, and her gift for place, people, sound and touch make this a brilliantly authentic and evocative portrait.

`There is nothing usual about Bingley's story or her way of telling it. It is full of bright colours like a child's paintbox. This is her first book...but it instantly takes its place beside country classics.' John Carey, Sunday Times

`This is a book so alive that when you finish it you feel that you have been there and met the people...[The] book has immense charm, and also a resonance that is beyond charm.' Diana Athill, Guardian

`You would need to have lost touch with all feeling not to be moved to tears by the book's final chapter.' Peter Parker, Telegraph

`"Bertie, May and Mrs Fish" is an instant English classic...a runaway pleasure to read.' Ali Smith

Xandra Bingley rode and trained ponies before she started work at seventeen for MI5. She travelled extensively before returning to London to join Ian Hamilton's New Review, and became a publisher's reader and then a commissioning editor at Jonathan Cape. She wrote regular profiles of writers for Tatler before she started her own literary agency. She has a son and a daughter and a grandson, and has lived by Primrose Hill for thirty-five years. This is her first book.

GOR002597848
9780007149513
0007149514
Bertie, May and Mrs Fish: Country Memories of Wartime by Xandra Bingley
Xandra Bingley
Used - Very Good
Paperback
HarperCollins Publishers
2006-07-31
240
Short-listed for PEN/Ackerley Prize 2006
Book picture is for illustrative purposes only, actual binding, cover or edition may vary.
This is a used book - there is no escaping the fact it has been read by someone else and it will show signs of wear and previous use. Overall we expect it to be in very good condition, but if you are not entirely satisfied please get in touch with us
Trustpilot