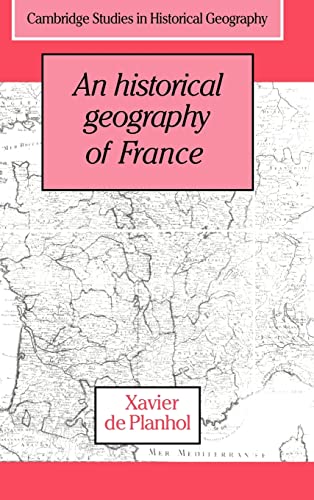 An Historical Geography of France
by Xavier De Planhol

In Stock
£73.99
In this 1994 book two of France's leading scholars trace the historical geography of their country from its roots in the Roman province of Gaul to the 1990s. Despite France's long history as an identifiable state they conclude that only in recent years has France truly achieved territorial unity.
Good
Only 1 left

An Historical Geography of France Summary

An Historical Geography of France by Xavier De Planhol

In this 1994 book, Xavier de Planhol and Paul Claval, two of France's leading scholars in the field, trace the historical geography of their country from its roots in the Roman province of Gaul to the 1990s. They demonstrate how, for centuries, France was little more than an ideological concept, despite its natural physical boundaries and long territorial history. They examine the relatively late development of a more complex territorial geography, involving political, religious, cultural, agricultural and industrial unities and diversities. The conclusion reached is that only in the twentieth century had France achieved a profound territorial unity and only now are the fragmentations of the past being overwritten.

An Historical Geography of France Reviews

"[de Planhol] displays impressive scholarly and literary skill as an interpreter of many aspects of France....He has provided historians with a clear demonstration of geographical purpose and imagination." The Geographical Review
"This volume is the first comprehensive historical geography of France available in English. ...insights large and small sparkle on these pages." The Professional Geographer
"..the book provides a clear framework for an easy understanding of the dominance of factors of unity over factors of unity over factors of dislocation affecting French history, and to a larger extent the French psyche. ,,,this Historical Geography of France is an absolute pleasure to read. ...this multi-purpose book is necessary addition to the library of all colleges or universities where French programs still carry some weight." Laurent Ditmann, European Studies Journal

List of figures; Preface; Part I. The Genesis of France: 1. The isthmus of Gaul; 2. The impact of Rome; 3. From Gaul to France; 4. The birth of France; Part II. The Traditional Organisation of the Territory of France: 5. The major divisions; 6. The secondary divisions; Part III. The Centralisation and Diversification of the French Space: 7. Paris and the Parisian centralisation; 8. Cultural action and reaction: unity and diversity; 9. The economic differentiation of space; 10. The rural exodus and urbanisation; 11. The France of large organisations; Notes; Guide to further reading; Bibliography; Index.

GOR004691620
An Historical Geography of France by Xavier De Planhol
Xavier De Planhol
Cambridge Studies in Historical Geography
Used - Good
Hardback
Cambridge University Press
1994-03-17
590
0521322081
9780521322089
N/A
Book picture is for illustrative purposes only, actual binding, cover or edition may vary.
The book has been read but remains in clean condition. All pages are intact and the cover is intact. Some minor wear to the spine.