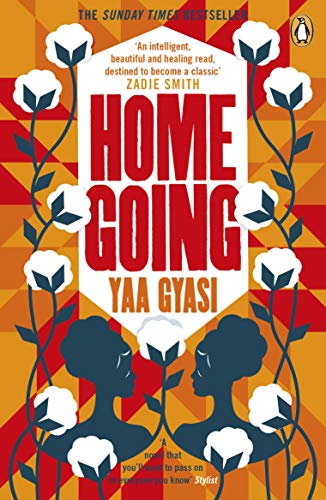 A BBC Top 100 Novels that Shaped Our World

Effia and Esi: two sisters with two very different destinies. One sold into slavery; one a slave trader's wife. The consequences of their fate reverberate through the generations that follow. Taking us from the Gold Coast of Africa to the cotton-picking plantations of Mississippi; from the missionary schools of Ghana to the dive bars of Harlem, spanning three continents and seven generations, Yaa Gyasi has written a miraculous novel - the intimate, gripping story of a brilliantly vivid cast of characters and through their lives the very story of America itself.

Epic in its canvas and intimate in its portraits, Homegoing is a searing and profound debut from a masterly new writer.

'This incredible book travels from Ghana to the US revealing how slavery destroyed so many families, traditions and lives - and how its terrifying impact is still reverberating now. Gyasi has created a story of real power and insight' Stylist, the Decade's 15 Best Books by Remarkable Women

Yaa Gyasi was born in Mampong, Ghana and raised in Huntsville, Alabama. Her first novel, Homegoing, was a Sunday Times bestseller, won the National Book Critics Circle Award for Best First Novel and was shortlisted for the PEN/Robert W. Bingham Prize for Debut Fiction. In 2017 Yaa Gyasi was selected as one of Granta's Best of Young American Novelists and in 2019 the BBC selected her debut as one of the 100 Novels that Shaped Our World.

GOR008790686
Homegoing by Yaa Gyasi
Yaa Gyasi
Used - Like New
Paperback
Penguin Books Ltd
2017-10-05
320
0241975239
9780241975237
N/A
Book picture is for illustrative purposes only, actual binding, cover or edition may vary.
The book has been read, but looks new. The book cover has no visible wear, and the dust jacket is included if applicable. No missing or damaged pages, no tears, possible very minimal creasing, no underlining or highlighting of text, and no writing in the margins.