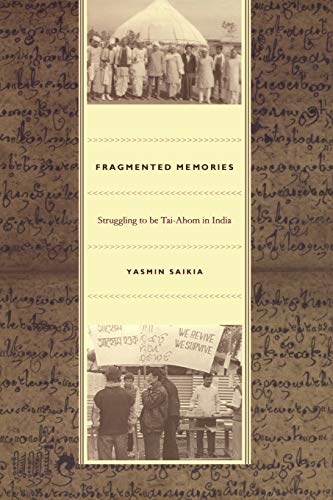 In Stock
£20.99
A study of identity and its connection to memory, focusing on the history of community identity formation among the Tai-Ahom in Assam.
Very Good
Only 1 left

Fragmented Memories: Struggling to be Tai-Ahom in India by Yasmin Saikia

Fragmented Memories is a beautifully rendered exploration of how, during the 1990s, socially and economically marginalized people in the northeastern Indian state of Assam sought to produce a past on which to base a distinctive contemporary identity recognized within late-twentieth-century India. Yasmin Saikia describes how groups of Assamese identified themselves as Tai-Ahom-a people with a glorious past stretching back to the invasion of what is now Assam by Ahom warriors in the thirteenth century. In her account of the 1990s Tai-Ahom identity movement, Saikia considers the problem of competing identities in India, the significance of place and culture, and the outcome of the memory-building project of the Tai-Ahom.

Assamese herself, Saikia lived in several different Tai-Ahom villages between 1994 and 1996. She spoke with political activists, intellectuals, militant leaders, shamans, and students and observed and participated in Tai-Ahom religious, social, and political events. She read Tai-Ahom sacred texts and did archival research-looking at colonial documents and government reports-in Calcutta, New Delhi, and London. In Fragmented Memories, Saikia reveals the different narratives relating to the Tai-Ahom as told by the postcolonial Indian government, British colonists, and various texts reaching back to the thirteenth century. She shows how Tai-Ahom identity is practiced in Assam and also in Thailand. Revealing how the "dead" history of Tai-Ahom has been transformed into living memory to demand rights of citizenship, Fragmented Memories is a landmark history told from the periphery of the Indian nation.

"Yasmin Saikia opens a new door to margins of national power, memory, and history, where most people live today. Her fresh voice and engaging prose weave together high theory, political engagement, textual expertise, ethnographic detail, personal experience, and a sweeping command of history in South Asia from medieval times to the present, with critical wisdom and graceful poignancy. Her history is more than history. It is an erudite evocation of the multiple pasts of Tai-Ahom people struggling to invent themselves in contemporary Assam, modern India, and a world of national minorities."-David Ludden, author of The New Cambridge History of India: An Agrarian History of South Asia

Yasmin Saikia is Assistant Professor of History at the University of North Carolina, Chapel Hill. She is the author of In the Meadows of Gold: Telling Tales of the Swargadeos at the Crossroads of Assam.

Acknowledgments ix
Preface xi
Introduction Locating Tai-Ahom in Assam: The Place and People 1
Part One
Historical and Comparative Perspectives on Identity: Indian, Assamese and Tai-Ahom
1. Identification in India 37
2. Colonial Origins of Ahom 77
3. The Memory of the Local: The Stories the Buranjis Tell 113
Part Two
Tai-Ahom: A Language and Culture of Emotion
4. Rationalizing a History 147
5. Performance and Politics of Tai-Ahom 177
6. There Was No Plot in the People's Struggle 225
Conclusion The Past and Present: Connecting Memory, History and Identity 251
Epilogue 267
Notes 269
References 301
Index 319

GOR009954496
Fragmented Memories: Struggling to be Tai-Ahom in India by Yasmin Saikia
Yasmin Saikia
Used - Very Good
Paperback
Duke University Press
2004-11-09
352
0822333732
9780822333739
N/A
Book picture is for illustrative purposes only, actual binding, cover or edition may vary.
This is a used book - there is no escaping the fact it has been read by someone else and it will show signs of wear and previous use. Overall we expect it to be in very good condition, but if you are not entirely satisfied please get in touch with us.