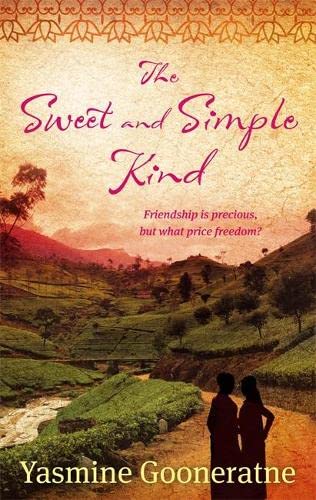 The Sweet And Simple Kind
by Yasmine Gooneratne

In Stock
£14.99
* This autobiographical novel is old-fashioned story-telling at its very best - indeed the reader feels utterly bereft once the novel is finished.
Very Good
Only 3 left

The Sweet And Simple Kind Summary

The Sweet And Simple Kind: A poetic account of a nation's troubled awakening by Yasmine Gooneratne

Loyalty (and the damnable lack of it in his wife) was the thought uppermost in the mind of Sir Andrew Millbanke as he looked down at Lady Alexandra's dead body, spread-eagled on the paved pathway of the Residency.'

And so begins an engrossing and dramatic family drama, set against the backdrop of Ceylon's bumpy evolution into Sri Lanka, as the Wijesinha clan struggle to balance their staunch political ambition against the ignominy of an embarrassing family scandal. And when two young family members, cousins Tsunami and Latha, meet and become firm friends no one can guess that their triumphant friendship will be played out over the passing years against both the best and the worst the newly independent Sri Lanka can offer as these two smart and Westernised young women pursue their own personal freedoms.

The Sweet And Simple Kind Reviews

"There is much to commend. . . . As one of her characters comments, 'Jane Austen's observation of society was part critical, part amused.' That quality is evident here." "Sunday Times""
"Sensitively observed, at once a bold novel of national consciousness and a tender tale of family and friendship." "Sunday Business Post""

Born in Colombo, educated at the Universities of Ceylon and Cambridge, Emeritus Professor Yasmine Gooneratne has taught, researched and published in the fields of English and Commonwealth/Postcolonial Literature for thirty-five years. On her return from Cambridge with a PhD in English, she taught at the University of Ceylon in Peradeniya for ten years (1962-1972) before accepting a senior position at Macquarie University in Australia, where she directed Macquarie's Postcolonial Literature and Language Research Centre (PLLRC) and taught until her retirement from active teaching in 1999. She had been writing verse since her schooldays in Sri Lanka, and she began writing fiction while teaching in Australia Her work as writer and teacher has been recognized by the award of a Personal Chair in English as well as of Macquarie University's first higher doctoral degree (D.Litt.). She has been honoured in three countries by conferment of the Order of Australia (AO), the Samvad India Foundation's Raja Rao Award, and the Sahityaratna ('Jewel of Literature') Award of Sri Lanka. Patron since 1990 of the Jane Austen Society of Australia, she is today the director of The Guardian Angels, a literary editing service, and a member of both the Australian Society of Authors and the English Writers' Cooperative of Sri Lanka. All her printed novels (including the first, which won Australia's Marjorie Barnard Literary Prize for Fiction) have been shortlisted for international prizes, among them the Commonwealth Writers Prize and the Dublin IMPAC International Prize. The most recent was published online. Also recent (2016) is her revival as an online journal of New Ceylon Writing, a literary magazine she co-published in 1970-1984.

GOR002797452
The Sweet And Simple Kind: A poetic account of a nation's troubled awakening by Yasmine Gooneratne
Yasmine Gooneratne
Used - Very Good
Paperback
Little, Brown Book Group
2010-02-04
720
0349121745
9780349121741
N/A
Book picture is for illustrative purposes only, actual binding, cover or edition may vary.
This is a used book - there is no escaping the fact it has been read by someone else and it will show signs of wear and previous use. Overall we expect it to be in very good condition, but if you are not entirely satisfied please get in touch with us.