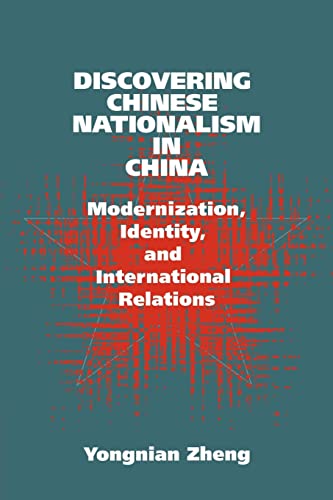 In Stock
£8.99
This book explores the complicated nature of China's new nationalism and presents the reader with a very different picture to that portrayed in Western readings of Chinese nationalism. Yongnian Zheng shows that the present Chinese leadership is pursuing strategies not to isolate China, but to integrate it into the international community.
Very Good
Only 1 left

This book explores the revival of Chinese nationalism in the 1990s, and analyses the ways in which the West deals with this phenomenon. Yongnian Zheng discusses the complicated nature of China's new nationalism and presents the reader with a very different picture to that portrayed in Western readings of Chinese nationalism. He argues that China's new nationalism has been a reaction to changes in the country's international circumstances and can be regarded as a 'voice' over the existing unjustified international order. Zheng shows that the present Chinese leadership is pursuing strategies not to isolate China, but to integrate it into the international community. Based on the author's extensive research in China, the book provides a set of provocative arguments against prevailing Western attitudes to and perceptions of China's nationalism.

'In this well-researched book, author Zheng Yongnian has reconstructed the ideological complex, based on seemingly-unrelated documents by other scholars, to provide a plausible explanation for the Chinese psyche that has been conundrum for China-watchers ... Zheng ... sounds a timely warning when he says 'many Chinese now believe that the West does not want to see China develop and will use all possible means to contain it.'' The Sunday Times, Singapore
'The particular strength of the book lies in the fact that the author makes extensive use of a variety of original Chinese source material from official and semi-official publications. In contrast to the prevalent and dominant Western discourse on Chinese nationalism, the author provides some insightful, more sympathetic discussions on Chinese nationalism from the view of an 'insider'.' Journal of Asian Studies
'This is an essential text to consider for anyone studying Chinese nationalism or China and the world.' Journal of Nationalism and Ethnic Politics
"This slim volume is an outstanding book on nationalism and Chinese foreign policy. Highly recommended for upper-division undergraduate collections and above." Choice
"...Zheng's new book has succeeded admirably in dissecting and analyzing the many dimensions of contemporary Chinese nationalism...the intricate and multilayered way Zheng deals with the subject has yielded a richly detailed synthesis of the subject. The book is a major contribution to our understanding of China's new nationalism in the 1990s." Canadian Journal of Political Science
"Zheng Yongnian has provided us with an excellent road map for the extraordinary range of opinions among today's Chinese intellectuals concerning Chinese nationalism, external threats to China, and China as a threat to others...[it] offers an excellent presentation of current perspectives on the forces that are shaping Chinese national identity and the debate over the role of the Chinese state. It is also a reminder that even some of China's leading intellectuals do not see Western civilization as benign or Western states as innocent in their intentions toward China." China Review International, Vol. 7

GOR008565071
Discovering Chinese Nationalism in China: Modernization, Identity, and International Relations by Yongnian Zheng (National University of Singapore)
Yongnian Zheng (National University of Singapore)
Cambridge Asia-Pacific Studies
Used - Very Good
Paperback
Cambridge University Press
1999-04-28
208
0521645905
9780521645904
N/A
Book picture is for illustrative purposes only, actual binding, cover or edition may vary.
This is a used book - there is no escaping the fact it has been read by someone else and it will show signs of wear and previous use. Overall we expect it to be in very good condition, but if you are not entirely satisfied please get in touch with us.