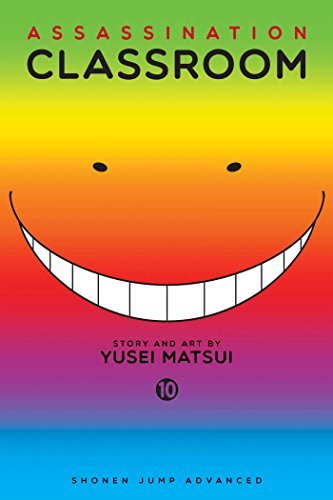 Used Price
£9.79
Free Shipping in the UK
What does a pathetic class of misfits have in their arsenal to combat their teacher's alien technology, bizarre powers, and...tentacles?!
Reviews:
Trustpilot
Very Good

Ever caught yourself screaming, "I could just kill that teacher"? What would it take to justify such antisocial behavior and weeks of detention? Especially if he's the best teacher you've ever had? Giving you an "F" on a quiz? Mispronouncing your name during roll call...again? How about blowing up the moon and threatening to do the same to Mother Earth-unless you take him out first?! Plus a reward of a cool 100 million from the Ministry of Defense! Okay, now that you're committed... How are you going to pull this off? What does your pathetic class of misfits have in their arsenal to combat Teach's alien technology, bizarre powers and...tentacles?!
The students of 3-E turn a surplus of eggs to good use-in pursuit of their usual goal. Karasuma teaches them the art of parkour while Koro Sensei teaches them the game of cops and robbers. Then, someone is stealing lingerie, and naturally Koro Sensei is the prime suspect! But is he being framed...and if so, by whom? Lastly, biologically modified Itona discovers that sometimes tentacles can be a burden rather than a gift. He puts everything he's got into his latest assassination attempt on Koro Sensei...but who will save Itona from himself?!

Yusei Matsui was born on the last day of January in Saitama Prefecture, Japan. He has been drawing manga since he began elementary school. Some of his favorite manga series are Bobobo-bo Bo-bobo, JoJo's Bizarre Adventure, and Ultimate Muscle. Matsui learned his trade working as an assistant to manga artist Yoshio Sawai, creator of Bobobo-bo Bo-bobo. In 2005, Matsui debuted his original manga Neuro: Supernatural Detective in Weekly Shonen Jump. In 2007, Neuro was adapted into an anime. In 2012, Assassination Classroom began serialization in Weekly Shonen Jump.

GOR008013909
Assassination Classroom, Vol. 10 by Yusei Matsui
Yusei Matsui
Assassination Classroom
Used - Very Good
Paperback
Viz Media, Subs. of Shogakukan Inc
2016-06-16
192
1421583224
9781421583228
N/A
Book picture is for illustrative purposes only, actual binding, cover or edition may vary.
This is a used book - there is no escaping the fact it has been read by someone else and it will show signs of wear and previous use. Overall we expect it to be in very good condition, but if you are not entirely satisfied please get in touch with us.