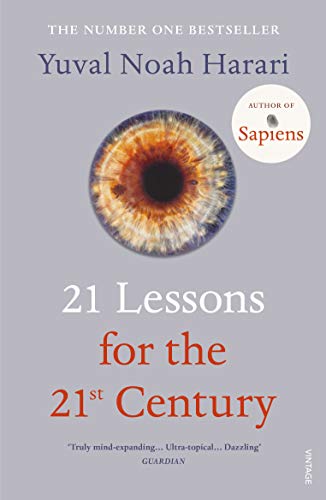 21 Lessons for the 21st Century
by Yuval Noah Harari

21 Lessons for the 21st Century Summary

21 Lessons for the 21st Century by Yuval Noah Harari

**THE NUMBER ONE BESTSELLER**

In twenty-one bite-sized lessons, Yuval Noah Harari explores what it means to be human in an age of bewilderment.

How can we protect ourselves from nuclear war, ecological cataclysms and technological disruptions? What can we do about the epidemic of fake news or the threat of terrorism? What should we teach our children?

Yuval Noah Harari takes us on a thrilling journey through today's most urgent issues. The golden thread running through his exhilarating new book is the challenge of maintaining our collective and individual focus in the face of constant and disorienting change.
Are we still capable of understanding the world we have created?

'Fascinating... compelling... [Harari] has teed up a crucial global conversation about how to take on the problems of the 21st century' Bill Gates, New York Times

21 Lessons for the 21st Century Reviews

Truly mind-expanding... Ultra-topical... Harari's big selling point [is] the ambition and breadth of his work, smashing together unexpected ideas into dazzling observations. * Guardian *
There is surely no one alive who is better at explaining our world than Yuval Noah Harari - he is the lecturer we all wish we'd had at university. Reading this book, I must have interrupted my partner a hundred times to pass on fascinating things I'd just read. Harari has done it again - 21 Lessons is, simply put, a crucial book. -- Adam Kay
Erudite, illuminating, vivid. [Harari's] lessons suggest new ways of thinking about current problems... a splendid, sobering, stirring call to arms. * Sunday Times *
Fascinating... compelling... [Harari] has teed up a crucial global conversation about how to take on the problems of the 21st century. -- Bill Gates * New York Times *
The great thinker of our age. * The Times *
Harari... is a rare voice of calm reassurance, slicing through the chaos and uncertainty of the modern age. -- Allan Hunter * Sunday Express *
Harari thrills his readers because he addresses the biggest possible topics with confidence and brio. Compared with the subjects he tackles, anything else we might read looks piffling and parochial. * Evening Standard *
Harari's genius at weaving together insights from different disciplines, ranging from ancient history to neuroscience to philosophy to artificial intelligence, has enabled him to respond to the clamour to understand where we have come from and where we might be heading... 21 Lessons is lit up by flashes of intellectual adventure and literary verve. * Financial Times *
Modern life can seem overwhelming. Fortunately, Yuval Noah Harari's new book, 21 Lessons for the 21st Century, is on hand to guide us through it. Poolside reading with purpose. * Elle *
[Harari's] purpose is to reveal the hard-learned lessons we have all already encountered this century... the persuasiveness of Harari's philosophical analysis, and the engaging quality of his writing, is hard to deny. * Esquire *

Yuval Noah Harari has a PhD in History from the University of Oxford and now lectures at the Hebrew University of Jerusalem, specialising in world history. His two books, Sapiens: A Brief History of Humankind and Homo Deus: A Brief History of Tomorrow, have become global bestsellers, with more than 12 million copies sold, and translations in more than forty-five languages.

GOR010117193
21 Lessons for the 21st Century by Yuval Noah Harari
Yuval Noah Harari
Used - Like New
Paperback
Vintage Publishing
2019-08-20
432
1784708283
9781784708283
N/A
Book picture is for illustrative purposes only, actual binding, cover or edition may vary.
The book has been read, but looks new. The book cover has no visible wear, and the dust jacket is included if applicable. No missing or damaged pages, no tears, possible very minimal creasing, no underlining or highlighting of text, and no writing in the margins.