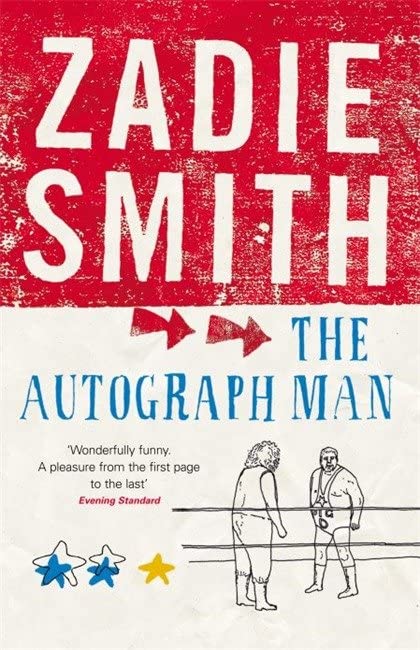 The Autograph Man
by Zadie Smith

Out of Stock
Following one Alex-Li Tandem - a twenty-something, Chinese-Jewish autograph dealer turned on by sex, drugs and organised religion, this title takes in London and New York, love and death, fathers and sons, as Alex tries to discover how a piece of paper can bring him closer to his heart's desire.
Like New
Only 0 left

The Autograph Man by Zadie Smith

From the MAN BOOKER PRIZE- and WOMEN'S PRIZE-SHORTLISTED author of Swing Time, White Teeth and On Beauty

'A pleasure from the first page to the last' Evening Standard

'Full of humour, the search for love and the fear of death... A touching, thoughtful, deeply felt rite-of-passage novel' Sunday Telegraph

The Autograph Man follows one Alex-Li Tandem: a twenty-something Chinese-Jewish autograph dealer turned on by sex, drugs and organised religion. From London to New York, love to death, fathers to sons, Alex tries to discover how a piece of paper can bring him closer to his heart's desire. Exposing our misconceptions about our idols - about ourselves - Zadie Smith delivers a brilliant, unforgettable tale about who we are and what we really want to be.

"Intelligent. . . . exquisitely clever. . . . an ironic commentary about fame, mortality, and the triumph of image over reality." --"The Boston Globe
""The same bracing intelligence and salty humor that distinguished her debut. . . . Smith scatters marvelous sentences and sharp insights on nearly every page." --"LA Times"
"A lovely surprise. Zadie Smith . . . has come out with a second book that is actually "better" than its predecessor: its dialog funnier, its language even more plugged in, more wired." --"Esquire
"
"A preternaturally gifted . . . writer [with] a voice that's street-smart and learned, sassy and philosophical all at the same time." -"The New York Times
"
"Savvy, witty and exuberant." -New York "Daily News
"
"Smith is young and smart, and . . . she proves to be an amazingly gifted writer." -"Washington Post Book World"
"Smith writes sharp dialogue for every age and race-and she's funny as hell." -"Newsweek"
"[Zadie Smith] possesses a more than ordinary share of talent." -"USA Today
"
"Absolutely delightful." -Alan Cheuse, "Chicago Tribune"
"Smith's clever, aphoristic observations and snappy dialogue are so delightful they tend to become addictive. . . . [The Autograph Man is] always entertaining." -"Elle
"