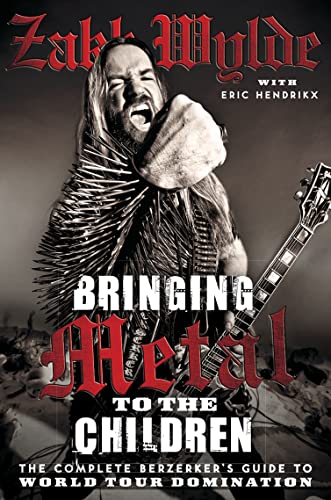 Bringing Metal To The Children
by Zakk Wylde

Zakk Wylde - the man, the guitar god, the legend - invites all who dare to follow onto the tour bus for tales of glory, debauchery and metal mayhem.

Bringing Metal To The Children Summary

Bringing Metal To The Children: The Complete Berserker's Guide to World Tour Domination by Zakk Wylde

Zakk Wylde - the man, the guitar god, the legend - invites all who dare to follow onto the tour bus for tales of glory, debauchery and metal mayhem.

Ever wondered what really goes on behind tour bus windows and backstage doors, or what inspiration fuels a mind-blowing metal display? The content of these pages will make you wish you never asked.

Among deranged tales of onstage indecent exposure and booze-fuelled destruction, Zakk leads you on a Journey to Valhalla, where your metal awakening awaits. For the aspiring Metal Musician, you'll be lucky enough to get Zakk's exclusive tips on how not to make it in the music business, how to survive decades on tour with the Prince of Darkness, Ozzy Osbourne, as well as useful tips on how to set up a shooting range on a tour bus and survive the mosh pit.

Aspire to reach new heights of metal mayhem. Get on the bus and get ready for the Metal ride of your life.

Bringing Metal To The Children Reviews

* Zakk Wylde. Great Player. Great Sound. Great Friend. EDWARD VAN HALEN
* If Zakk Wylde did not exist we would have to build him like Frankenstein's monster. The hands of Randy Rhoads sewn onto the body of Conan the Barbarian implanted with the brain of Larry David. ROB ZOMBIE
* Zakk Wylde possesses the strength Thor, heart of a lion, and endowment of a steed. When I wage war in Ragnaroek, I shall order my Valkyries to bring this brave and noble Berzerker to fight along my side. ODIN, NORSE GOD AND RULER OF ASGARD
* When Zakk plays it's like Guitarmageddon!! It's an audio assault coming from his fretboard and the true meaning of guitar hero. KERRY KING
* I love and respect Zakk as if he were my son. Matter of fact, he says he is my son! He is the ultimate musician, great guitarist, and incredible on the piano. His guitar playing makes me grin ear to ear and that is a true gift. LESLIE WEST
* Zakk is a man with a truly remarkable voice that stands alongside his crazyman guit-fiddle skills. He and Darrell were always blowin' shit up, but the way I look at it, you can always fix stuff, but you can never replace the memories. RITA HANEY, DIMEBAG'S HAG
* Whenever I'm stuck on a scene, I find myself thinking, 'What would Zakk do?' Invariably, I think back to the first time I met the guy. He pulled me into a thunderous man-hug, shoved a cold Stella in my hands, whipped out his rather prodigious member, stretched it around his wrist like a fleshy Timex and asked me what time it was. Then he urinated in a trash can for about five minutes. It was, in a word, awesome. Much has been said about Zakk's status as the world's last real guitar hero. Not enough has been said about his abilities as a comic actor. If the fucker would just stop working out and let himself go already, he could be the next Belushi. TOM KAPINOS, CREATOR/EXECUTIVE PRODUCER, CALIFORNICATION
* There ain't a fake bone in his body. STEVE AUSTIN

In the two decades since Ozzy Osbourne hired him away from his job at a New Jersey gas station, Zakk Wylde has established himself as a guitar icon known and revered the world over. Wylde has won nearly every guitar award imaginable, graced countless magazine covers and is a major influence to a new battalion of rock guitarists. Writing and recording with Osbourne led to multi-platinum success, inspiring him to create the now iconic Black Label Society in 1998. To date, Black Label Society has sold more than 3.5 million albums worldwide and continues to be a massive presence on the worldwide touring and merchandising circuits.

GOR004712860
Bringing Metal To The Children: The Complete Berserker's Guide to World Tour Domination by Zakk Wylde
Zakk Wylde
Used - Very Good
Paperback
HarperCollins Publishers
2012-05-10
224
0007395884
9780007395880
N/A
Book picture is for illustrative purposes only, actual binding, cover or edition may vary.
This is a used book - there is no escaping the fact it has been read by someone else and it will show signs of wear and previous use. Overall we expect it to be in very good condition, but if you are not entirely satisfied please get in touch with us.