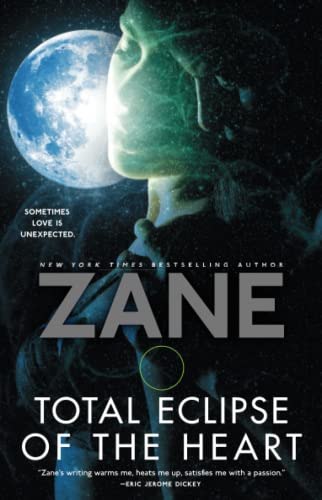 Total Eclipse of the Heart
by Zane

In Stock
£15.99
A novel about two heterosexual couples whose lives intersect in surprising ways after one of the men saves both women from a car crash.
Very Good
Only 1 left

Total Eclipse of the Heart Summary

Total Eclipse of the Heart: A Novel by Zane

Brooke Alexander is in love with one of Washington, D.C.'s most prominent attorneys, or so she believes. Patrick is everything that dreams are made of, or so she believes. Brooke is a waitress in a diner and has self-esteem issues regarding her lackluster existence and her fluctuating weight. One day, Patrick can be loving and supportive. The next, demeaning and seemingly angry at the world.

Damon Johnson has been married to his wife, Carleigh, for four years. He is one of "the last good men." He is compassionate, honest, and worships the ground that she walks on. But Carleigh treats Damon like a trophy husband, allowing her friends to salivate over him and disrespect their happy home. Damon has dreams outside of his six-figure corporate job and Carleigh treats his life aspirations like a joke. Her selfish nature makes Damon wonder if he made the right decision when he asked for her hand in marriage.

A tragic event forces Brooke and Damon to become a part of each other's lives. Through the darkest of times, they find the courage, strength and perseverance to rid themselves of the toxic elements corrupting their emotional well-being. They discover the true meaning of unconditional love when, together, they experience a total eclipse of the heart.

Total Eclipse of the Heart Reviews

"Arguably not since the emergence of Nancy Friday has American letters produced a purveyor of erotica with such mass-market appeal." -The New York Times
"Zane's writing warms me, heats me up, satisfies me with a passion." -Eric Jerome Dickey

Zane is the New York Times bestselling author of Afterburn, The Heat Seekers, Dear G-Spot, Gettin' Buck Wild, The Hot Box, Total Eclipse of the Heart, Nervous, Skyscraper, Love is Never Painless, Shame on It All, and The Sisters of APF; the ebook short stories "I'll be Home for Christmas" and "Everything Fades Away"; and editor for the Flava anthology series, including Z-Rated and Busy Bodies. Her TV series, Zane's Sex Chronicles, and The Jump Off are featured on Cinemax, and her bestselling novel Addicted is a major motion picture with Lionsgate Films. She is the publisher of Strebor Books, an imprint of Atria Books/Simon & Schuster. Visit her online at EroticaNoir.com.

GOR006320457
Total Eclipse of the Heart: A Novel by Zane
Zane
Used - Very Good
Paperback
Atria Books
2010-08-01
352
0743499301
9780743499309
N/A
Book picture is for illustrative purposes only, actual binding, cover or edition may vary.
This is a used book - there is no escaping the fact it has been read by someone else and it will show signs of wear and previous use. Overall we expect it to be in very good condition, but if you are not entirely satisfied please get in touch with us.