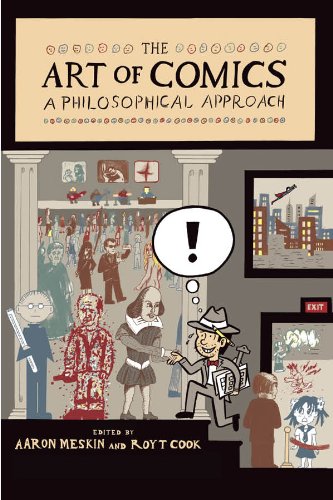 The Art of Comics
by Aaron Meskin

Used Price
$54,99
Free Shipping in the US
The Art of Comics is the first-ever collection of essays published in English devoted to the philosophical topics raised by comics and graphic novels.
Reviews:
Trustpilot
Like New

The Art of Comics Summary

The Art of Comics: A Philosophical Approach by Aaron Meskin

The Art of Comics is the first-ever collection of essays published in English devoted to the philosophical topics raised by comics and graphic novels. In an area of growing philosophical interest, this volume constitutes a great leap forward in the development of this fast expanding field, and makes a powerful contribution to the philosophy of art. The first-ever anthology to address the philosophical issues raised by the art of comics Provides an extensive and thorough introduction to the field, and to comics more generally Responds to the increasing philosophical interest in comic art Includes a preface by the renowned comics author Warren Ellis Many of the chapters are illustrated, and the book carries a stunning cover by the rising young comics star David Heatley

Customer Reviews - The Art of Comics

The Art of Comics Reviews

"Regardless, though, considered as a whole, The Art of Comicsis an excellent collection and one which is likely to provoke spirited debate and serve as a spur to further research within Anglo-American philosophy (and philosophy more generally) into this sadly neglected art form. I, for one, look forward to these future developments immensely. To quote one of the greats in the history of comics--excelsior!." (British Journal of Aesthetics, 1 October 2013)

"The Art of Comics would make a fine addition to any undergraduate reading list, introducing as it does several important notions in contemporary aesthetics." (The Journal of Aesthetics & Art Criticism, 1 November 2013)

Aaron Meskin is Senior Lecturer in Philosophy at the University of Leeds. He is the author of numerous journal articles and book chapters on aesthetics and other philosophical subjects. His work on comics has been published in The Journal of Aesthetics and Art Criticism and the British Journal of Aesthetics . He was the first aesthetics editor for the online journal Philosophy Compass, and he co-edited Aesthetics: A Comprehensive Anthology (Wiley-Blackwell, 2007). He is a former Trustee of the American Society for Aesthetics and is Treasurer of the British Society of Aesthetics. Roy T. Cook is Associate Professor of Philosophy at the University of Minnesota-Twin Cities, a Resident Fellow at the Minnesota Center for Philosophy of Science, and an Associate Fellow of the Northern Institute of Philosophy at the University of Aberdeen. He has published numerous articles and book chapters on philosophical logic, mathematical logic, philosophy of mathematics, and more recently on the aesthetics of comics. He previously edited The Arche Papers on the Mathematics of Abstraction (2007), and is the author of A Dictionary of Philosophical Logic (2009).

GOR010529115
The Art of Comics: A Philosophical Approach by Aaron Meskin
Aaron Meskin
New Directions in Aesthetics
Used - Like New
Hardback
John Wiley and Sons Ltd
2012-02-09
256
1444334646
9781444334647
N/A
Book picture is for illustrative purposes only, actual binding, cover or edition may vary.
The book has been read, but looks new. The book cover has no visible wear, and the dust jacket is included if applicable. No missing or damaged pages, no tears, possible very minimal creasing, no underlining or highlighting of text, and no writing in the margins.