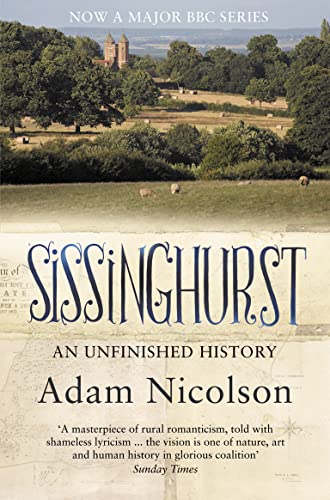 A fascinating account from award-winning author Adam Nicolson of the history of Nicolson's own national treasure, his family home: Sissinghurst.

A fascinating account from award-winning author Adam Nicolson of the history of Nicolson's own national treasure, his family home: Sissinghurst.

Sissinghurst is world-famous as a place of calm and beauty, a garden slipped into the ruins of a rose-pink Elizabethan palace. But is it entirely what its creators intended? Has its success over the last thirty years come at a price? Is Sissinghurst everything it could be?

The story of this piece of land, an estate in the Weald of Kent, is told here for the first time from the very beginning. Adam Nicolson, who now lives there, has uncovered remarkable new findings about its history as a medieval manor and great sixteenth-century house, from the days of its decline as an eighteenth-century prison to a flourishing Victorian farm and on to the creation, by his grandparents Vita Sackville-West and Harold Nicolson, of a garden in a weed-strewn wreck.

Alongside his recovery of the past, Adam Nicolson wanted something else: for the land at Sissinghurst to live again, to become the landscape of orchards, cattle, fruit and sheep he remembered from his boyhood. Could that living frame of a mixed farm be brought back to what had turned into monochrome fields of chemicalised wheat and oilseed rape? Against the odds, he was going to try.

This paperback edition will be fully updated to cover the first year of Adam Nicolson's endeavour to revive the estate and return it to the glories of its past. More than just a personal biography of a place, this book is the story of taking an inheritance and steering it in a new direction, just as an entrepreneur might take hold of a company, or just as all of us might want to take our dreams and make them real.

`A masterpiece of rural romanticism, told with shameless lyricism...the vision is one of nature, art and human history in glorious coalition...uplifting.' Sunday Times

`An expert at conveying the "stuff" of place, Nicolson is equally good with people...as Adam Nicolson understands, places tell us about the people who walked them and the dreams they pursued' TLS

"a beautifully expressed exploration of the estate...poignant" The Guardian

"fascinating....elegant and perceptive...his passion makes this a gripping account." The Observer

"a masterpiece of rural romanticism...the narrative is charmingly interspersed with tales from Sissinghurst's past" Sunday Times

Adam Nicolson is the author of many books on history, travel and the environment. He is winner of the Somerset Maugham Award and the British Topography Prize and lives at Sissinghust Castle in Kent.This is his fifth book for HarperCollins - his previous five being `Arcadia' (`Earls of Paradise' in hardback), `Men of Honour', `Sea Room', `Power and Glory' and `Seamanship'.

GOR001281401
Sissinghurst: An Unfinished History by Adam Nicolson
Adam Nicolson
Used - Very Good
Paperback
HarperCollins Publishers
2009-09-03
400
0007240554
9780007240555
Winner of Spear's Book Awards: Family History Book of the Year 2009 Winner of Ondaatje Prize 2009
Book picture is for illustrative purposes only, actual binding, cover or edition may vary.
This is a used book - there is no escaping the fact it has been read by someone else and it will show signs of wear and previous use. Overall we expect it to be in very good condition, but if you are not entirely satisfied please get in touch with us.