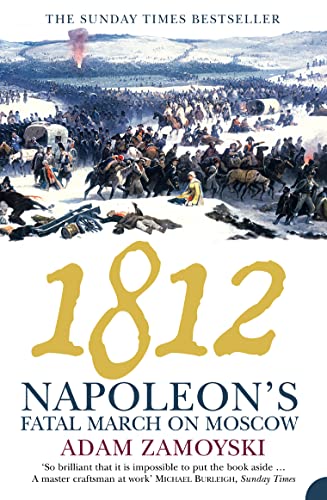 Adam Zamoyski's bestselling account of Napoleon's invasion of Russia and his catastrophic retreat from Moscow, events that had a profound effect on European history.

Adam Zamoyski's bestselling account of Napoleon's invasion of Russia and his catastrophic retreat from Moscow, events that had a profound effect on European history.

In 1812 the most powerful man in the world assembled the largest army in history and marched on Moscow with the intention of consolidating his dominion. But within months, Napoleon's invasion of Russia - history's first example of total war - had turned into an epic military disaster. Over 400,000 French and Allied troops perished and Napoleon was forced to retreat.

Adam Zamoyski's masterful work draws on the harrowing first-hand accounts of soldiers and civilians on both sides of the conflict. The result takes the reader beyond the invasion of Russia to present both a poignant tale of the individual foot soldier and a sweeping history of a turbulent time.

`So brilliant that it is impossible to put the book aside ... A master craftsman at work.' Michael Burleigh, Sunday Times

`Zamoyski's book is a brilliant piece of narrative history, full of sparkling set-pieces, a wholly fascinating account of what must be reckoned one of the greatest military disasters of all time.' Sunday Telegraph

`No review can do justice to the scholarly integrity and human sensitivity of this book, or to the horror is describes ... "1812" is one of the greatest stories ever told.' Christopher Woodward, Spectator

`An utterly admirable book. It combines clarity of thought and prose with a strong narrative drive.' Daily Telegraph

`The best non-fiction version to be written so far ... Zamoyski is brilliant at explaining what it must have been like to be a foot soldier.' Mail on Sunday

Adam Zamoyski was born in New York but has spent most of his life in England. A freelance historian with a singular command of languages, his recent books include `1812: Napoleon's Fatal March on Moscow', `Rites of Peace: The Fall of Napoleon and the Congress of Vienna' and `Warsaw 1920: Lenin's Failed Conquest of Europe'. He is married to the painter Emma Sergeant.

GOR007990938
1812: Napoleon's Fatal March on Moscow by Adam Zamoyski
Adam Zamoyski
Used - Like New
Paperback
HarperCollins Publishers
2005-04-04
672
0007123744
9780007123742
N/A
Book picture is for illustrative purposes only, actual binding, cover or edition may vary.
This is a used book - there is no escaping the fact it has been read by someone else and it will show signs of wear and previous use. Overall we expect it to be in very good condition, but if you are not entirely satisfied please get in touch with us.