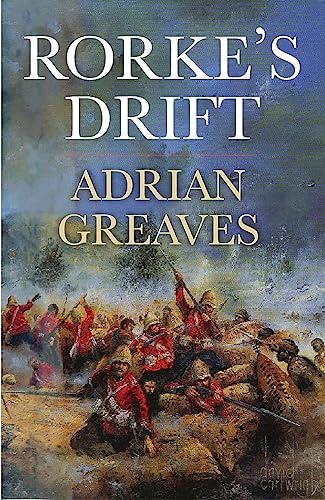 In Stock
$6.69
The story of the bravest battle ever fought.
Very Good Good
Only 1 left

The story of the bravest battle ever fought.

On 22nd January 1879 a force of 20,000 Zulus overwhelmed and destroyed the British invading force at Isandlwana, killing and ritually disemboweling over 1200 troops. That afternoon, the same Zulu force turned their attention on a small outpost at Rorke's Drift.

The battle that ensued, one of the British Army's great epics, has since entered into legend. Throughout the night 85 men held off six full-scale Zulu attacks at the cost of only 27 casualties, forcing the Zulu army to withdraw. Eleven Victoria Crosses were awarded for bravery shown on that night, the largest number for any one engagement in history.

But as Adrian Greaves's new research shows there are several things about the myth of Rorke's Drift that don't add up. While it was the scene of undoubted bravery, it was also the scene of some astonishing cases of cowardice, and there is increasing evidence to suggest that the legend of Rorke's Drift was created to divert attention from the appalling British mistakes which caused the earlier defeat at Isandlwana.

Having spent many years as a police superintendent, Dr Adrian Greaves now devotes all his time to the study of the Anglo-Zulu Wars. He is the founder/editor of the Journal of the Anglo-Zulu War Historical Society, and gives regular battlefield tours of Isandlwana and Rorke's Drift.

CIN000125804
Rorke's Drift by Adrian Greaves
Adrian Greaves
Cassell Military Paperbacks
Used - Very Good
Paperback
Orion Publishing Co
2003-09-11
464
0304366412
9780304366415
N/A
Book picture is for illustrative purposes only, actual binding, cover or edition may vary.
This is a used book - there is no escaping the fact it has been read by someone else and it will show signs of wear and previous use. Overall we expect it to be in very good condition, but if you are not entirely satisfied please get in touch with us.