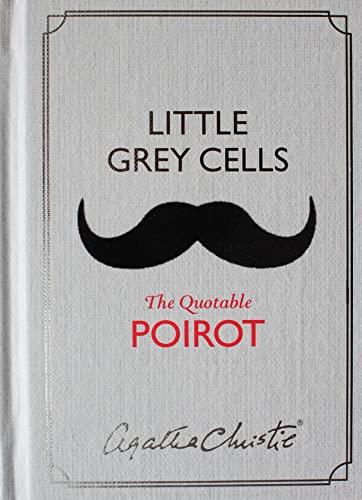 Discover the man behind the moustache in this book of one-liners by the world's most famous Belgian detective, revealing the wit and wisdom of Hercule Poirot and his creator, Agatha Christie. A perfect stocking-filler for every Christie fan, to help celebrate her 125th birthday.

Discover the man behind the moustache in this book of one-liners by the world's most famous Belgian detective, revealing the wit and wisdom of Hercule Poirot and his creator, Agatha Christie. A perfect stocking-filler for every Christie fan, to help celebrate her 125th birthday.

`My name is Hercule Poirot and I am probably the greatest detective in the world.'

The dapper, moustache-twirling little Belgian with the egg-shaped head, curious mannerisms and inordinate respect for his own `little grey cells' solved some of the twentieth century's most puzzling crimes. But what do we really know about the eccentric genius underneath that fussy facade?

Sometimes funny, often profound, and always revealing, this book of quotes and comments, from more than 50 Poirot novels and short stories, gives an entertaining glimpse of the man behind the moustache, and the wit and wisdom of the Queen of Crime who created him.

Includes an exclusive essay by Agatha Christie from the archives on her love/hate relationship with her most famous creation.

`As usual, the little man has the last word!'-Agatha Christie, 1938

Agatha Christie was born in Torquay in 1890 and became, quite simply, the best-selling novelist in history. Her first novel, The Mysterious Affair at Styles, written towards the end of the First World War, introduced us to Hercule Poirot, who was to become the most popular detective in crime fiction since Sherlock Holmes. She is known throughout the world as the Queen of Crime. Her books have sold over a billion copies in the English language and another billion in over 100 foreign languages. She is the author of 80 crime novels and short story collections, 20 plays, and six novels under the name of Mary Westmacott.

GOR008409436
Little Grey Cells: The Quotable Poirot by Agatha Christie
Agatha Christie
Used - Like New
Hardback
HarperCollins Publishers
2015-09-10
160
0008116601
9780008116606
N/A
Book picture is for illustrative purposes only, actual binding, cover or edition may vary.
This is a used book - there is no escaping the fact it has been read by someone else and it will show signs of wear and previous use. Overall we expect it to be in very good condition, but if you are not entirely satisfied please get in touch with us.