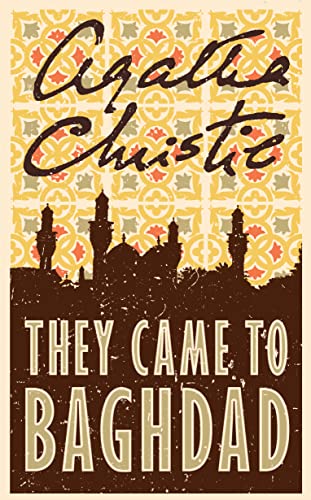 They Came to Baghdad
by Agatha Christie

They Came to Baghdad Summary

They Came to Baghdad by Agatha Christie

Baghdad is the chosen location for a secret summit of superpowers, concerned but not convinced, about the development of an, as yet, unidentified and undescribed secret weapon.

Only one man has the proof that can confirm the nature of this fantastic secret weapon - a British agent named Carmichael. Unfortunately the criminal organisation responsible for the weapon's development will stop at nothing to prevent him entering Baghdad and presenting his proof to the assembled delegates. Can Carmichael enter the city against such odds?

Into this explosive situations appears Victoria Jones, a girl with a yearning for adventure who gets more than she bargains for when a wounded Carmichael dies in her arms in her hotel room.

They Came to Baghdad Reviews

`A very human heroine, whose powers of invention, just like those of her creator, never fail her'
Times Literary Supplement

`The acknowledged queen of detective fiction.'
The Observer

GOR001238076
They Came to Baghdad by Agatha Christie
Agatha Christie
Used - Very Good
Paperback
HarperCollins Publishers
2003-05-06
320
0007154933
9780007154937
N/A
Book picture is for illustrative purposes only, actual binding, cover or edition may vary.
This is a used book - there is no escaping the fact it has been read by someone else and it will show signs of wear and previous use. Overall we expect it to be in very good condition, but if you are not entirely satisfied please get in touch with us.