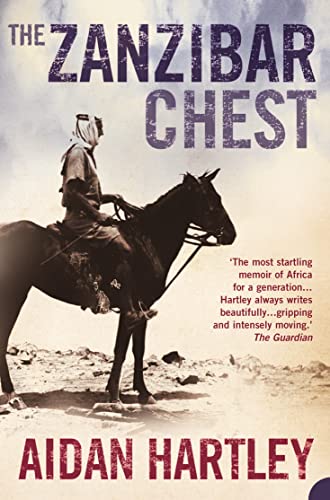 The Zanzibar Chest
by Aidan Hartley

A deeply affecting memoir of a childhood in Africa and the continent's horrendous wars, which Hartley witnessed at first hand as a journalist in the 1990s. Shortlisted for the prestigious Samuel Johnson Prize for Non-fiction, this is a masterpiece of autobiographical journalism.

The Zanzibar Chest: A Memoir of Love and War by Aidan Hartley

A deeply affecting memoir of a childhood in Africa and the continent's horrendous wars, which Hartley witnessed at first hand as a journalist in the 1990s. Shortlisted for the prestigious Samuel Johnson Prize for Non-fiction, this is a masterpiece of autobiographical journalism.

Aidan Hartley, a foreign correspondent, burned-out from the horror of covering the terrifying micro wars of the 1990s, from Rwanda to Bosnia, seeks solace and solitude in the remote mountains and deserts of southern Arabia and the Yemen, following his father's death. While there, he finds himself on the trail of the tragic story of an old friend of his father's, who fell in love and was murdered in southern Arabia fifty years ago. As the terrible events of the past unfold, Hartley finds his own kind of deliverance.

`The Zanzibar Chest' is a powerful story about a man witnessing and confronting extreme violence and being broken down by it, and of a son trying to come to terms with the death of a father whom he also saw as his best friend. It charts not only a love affair between two people, but also the British love affair with Arabia and the vast emptinesses of the desert, which become a fitting metaphor for the emotional and spiritual condition in which Hartley finds himself.

`A truly impressive and haunting book, an impassioned and often beautifully written account of one man's journey to the heart of darkness, and his slow, painful voyage back.' Harry Ritchie, Daily Mail

`Underpinning the grisly details of wars in Somalia, Ethiopia, Rwanda and Burundi that Hartley experienced first-hand and at no small emotional cost to himself, is a touching story of his childhood in colonial Africa.' Iain Finlayson, The Times

`"The Zanzibar Chest" is a necessary book...you will struggle to find a more authentic, urgent or brilliant account of the underbelly of contemporary Africa...this book seems destined to become a classic.' Christopher Ross, Sunday Express

A masterpiece. This is a hugely ambitious book.' Matthew Leeming, Spectator

`No other African correspondent has been so successful in blending both hard reporting and laddish on-the-road antics within a personal and lyrical framework. Hartley evokes the excitement and pathos of the modern continent...he is perhaps the best mzungu writing about the real Africa today.' Andrew Lycett, Sunday Times

Aidan Hartley was born in 1965 and raised in East Africa. He read English at Balliol College, Oxford, and later politics at London University. He joined Reuters as a foreign correspondent and has worked in Africa, the Balkans, the Middle East and Russia. In 1996 he began travelling and writing on his own.

GOR010584794
The Zanzibar Chest: A Memoir of Love and War by Aidan Hartley
Aidan Hartley
Used - Like New
Paperback
HarperCollins Publishers
2004-02-28
320
0006531210
9780006531210
N/A
Book picture is for illustrative purposes only, actual binding, cover or edition may vary.
This is a used book - there is no escaping the fact it has been read by someone else and it will show signs of wear and previous use. Overall we expect it to be in very good condition, but if you are not entirely satisfied please get in touch with us.