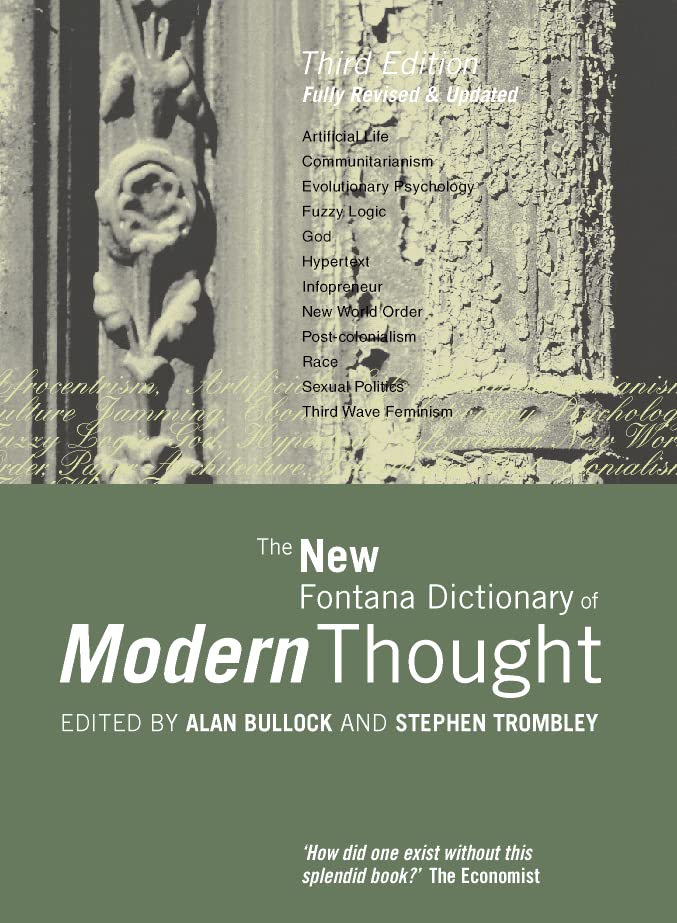 The New Fontana Dictionary of Modern Thought
by Alan Bullock

A fully revised and updated edition of this unique, well-established, classic work of reference and companion to all fields of modern thought.

The New Fontana Dictionary of Modern Thought by Alan Bullock

A fully revised and updated edition of this unique, well-established, classic work of reference and companion to all fields of modern thought.

The Fontana Dictionary of Modern Thought has been continuously in print in earlier editions for more than twenty years. The New Fontana Dictionary of Modern Thought contains some 4000 entries by 326 expert contributors. Nearly 1000 entries are entirely new; and most of those that survive from the previous (1988) edition have been substantially revised or newly written for this edition. Areas which have been expanded include computing, identity politics and environmental studies, and there are new entries on God, communitarianism, perestroika, new world order, afrocentricity, ebonics, third wave feminism, hypertext, virtual reality, culture jamming, cloning, post-colonialism, fuzzy logic, artificial life, paper architecture, infopreneur...

Alan Bullock's famous first book HITLER: A STUDY IN TYRANNY has been translated into 19 languages and sold more than 3 million copies. He was Founding Master of St Catherine's College, Oxford, and became Vice-Chancellor of Oxford University. He was knighted in 1972 and made a life peer in 1976. His most recent book HITLER AND STALIN: PARALLEL LIVES (Fontana Press) has sold over 150,000 copies in the English language. Stephen Trombley is a writer and prize-winning documentary film-maker. Born in New York, he has studied and worked in England as a journalist and editor. In 1990 he founded Worldview Pictures, an international television company.

GOR001226585
The New Fontana Dictionary of Modern Thought by Alan Bullock
Alan Bullock
Used - Very Good
Paperback
HarperCollins Publishers
2000-07-03
960
0006863833
9780006863830
N/A
Book picture is for illustrative purposes only, actual binding, cover or edition may vary.
This is a used book - there is no escaping the fact it has been read by someone else and it will show signs of wear and previous use. Overall we expect it to be in very good condition, but if you are not entirely satisfied please get in touch with us.