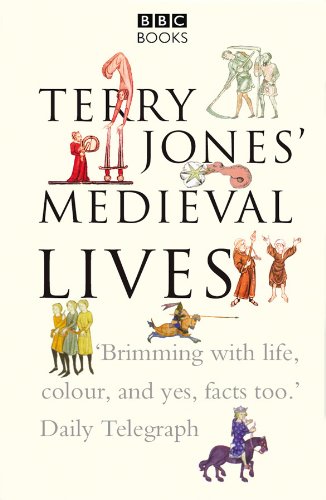 In Stock
$11,39
Was medieval England full of knights on horseback rescuing fainting damsels in distress? Terry Jones' Medieval Lives reveals Medieval Britain as you have never seen it before - a vibrant society teeming with individuality, intrigue and innovation.
Very Good
17 in stock

Was medieval England full of knights on horseback rescuing fainting damsels in distress? Were the Middle Ages mired in superstition and ignorance? Why does nobody ever mention King Louis the First and Last? And, of course, those key questions: which monks were forbidden the delights of donning underpants... and did outlaws never wear trousers? Terry Jones and Alan Ereira are your guides to this most misrepresented and misunderstood period, and they point you to things that will surprise and provoke. Did you know, for example, that medieval people didn't think the world was flat? That was a total fabrication by an American journalist in the 19th century. Did you know that they didn't burn witches in the Middle Ages? That was a refinement of the so-called Renaissance. In fact, medieval kings weren't necessarily merciless tyrants, and peasants entertained at home using French pottery and fine wine. Terry Jones' Medieval Lives reveals Medieval Britain as you have never seen it before - a vibrant society teeming with individuality, intrigue and innovation.

"Jones laces the latest academic research with his own increasingly avuncular humour. Who says history can't be fun? In the hands of Professor Jones, how could it be anything else?" * Observer *
"Jones really knows his subject, he is also a passionate apologist for the Middle Ages.... and you also learnt things which made your view of the period a little more complex" * Independent *
"Jones is a reliable and accurate guide to his period, mercifully free from the pomposity that afflicts so many telly historians. Three cheers for Terry Jones" * London Evening Standard *
"Brimming with life, colour, and yes, facts too" * Daily Telegraph *

Terry Jones is best known as a member of Monty Python but he has also written books on medieval England, Chaucer's Knight, the highly acclaimed Who Murdered Chaucer? and Crusades, as well as Terry Jones' Barbarians, which accompanied a major television series he presented in 2006. He is the author of several children's books including Fairy Tales and Fantastic Stories, The Knight and the Squire and The Lady and the Squire. He has directed several feature films: Monty Python and the Holy Grail, The Life of Brian, The Meaning of Life, Personal Services, Erik the Viking and The Wind in the Willows. Alan Ereira has worked as an award-winning producer and writer of history programmes on radio and television for over 40 years, and has collaborated with Terry for ten years on a number of historical films. His previous books include The People's England, The Invergordon Mutiny, The Heart of the World and (with Terry Jones) Crusades and Terry Jones' Barbarians.

GOR001224881
Terry Jones' Medieval Lives by Terry Jones
Terry Jones
Used - Very Good
Paperback
Ebury Publishing
2001-01-01
240
0563522755
9780563522751
N/A
Book picture is for illustrative purposes only, actual binding, cover or edition may vary.
This is a used book - there is no escaping the fact it has been read by someone else and it will show signs of wear and previous use. Overall we expect it to be in very good condition, but if you are not entirely satisfied please get in touch with us.