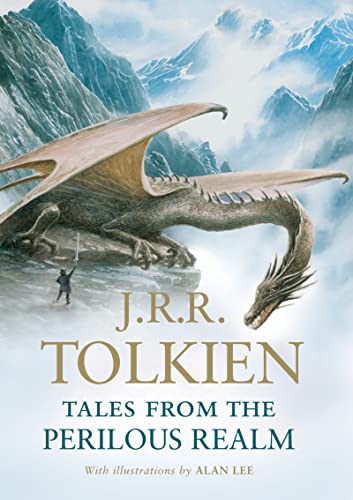 Tales from the Perilous Realm
by Alan Lee

Used Price
$48.99
Free Shipping in the US
Never before published in a single volume, Tolkien's four novellas ("Farmer Giles of Ham, Leaf by Niggle, Smith of Wootton Major," and "Roverandom") and one book of poems ("The Adventures of Tom Bombadil") are gathered together in a fully illustrated set.
Reviews:
Trustpilot
Very Good

Tales from the Perilous Realm Summary

Tales from the Perilous Realm by Alan Lee

The definitive collection of Tolkien's classic "fairie" tales, in the vein of The Hobbit, illustrated by Oscar winner Alan Lee

Never before published in a single volume, Tolkien's four novellas (Farmer Giles of Ham, Leaf by Niggle, Smith of Wootton Major, and Roverandom) and one book of poems (The Adventures of Tom Bombadil) are gathered together for the first time, in a fully illustrated volume. This definitive collection of works -- which had appeared separately, in various formats, between 1949 and 1998 -- comes with a brand-new foreword and endmatter, and with a series of detailed pencil illustrations by Alan Lee, in the style of his other award-winning Tolkien work, most recently in The Children of Hurin.

The book is the perfect opportunity for fans of Middle-earth to enjoy some of Tolkien's often overlooked yet most creative storytelling. With dragons and sand sorcerers, sea monsters and hobbits, knights and dwarves, this collection contains all the classic elements for Tolkien buffs of all ages.

ALAN LEE was born in Middlesex in 1947. His illustrated books include Faeries (with Brian Froud), Castles and Merlin Dreams, and the three 'Great Tales' of Middle-earth: The Children of Hurin, Beren and Luthien, and The Fall of Gondolin. He has worked on such prestigious films as Erik the Viking (Terry Gilliam), Legend (Ridley Scott), and the acclaimed NBC miniseries Merlin. He is best known, however, for his work on the books The Hobbit and The Lord of the Rings, and now the film versions. J.R.R. TOLKIEN (1892-1973) is the creator of Middle-earth and author of such classic and extraordinary works of fiction as The Hobbit, The Lord of the Rings, and The Silmarillion. His books have been translated into more than fifty languages and have sold many millions of copies worldwide.

GOR007073546
Tales from the Perilous Realm by Alan Lee
Alan Lee
Used - Very Good
Hardback
Cengage Learning, Inc
2008-11-01
403
0547154119
9780547154114
N/A
Book picture is for illustrative purposes only, actual binding, cover or edition may vary.
This is a used book - there is no escaping the fact it has been read by someone else and it will show signs of wear and previous use. Overall we expect it to be in very good condition, but if you are not entirely satisfied please get in touch with us.