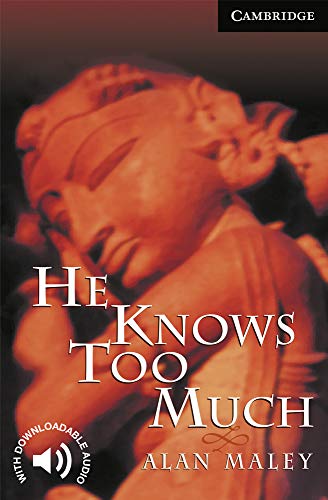 He Knows Too Much Level 6
by Alan Maley

In Stock
$8.69
Award-winning original fiction for learners of English. At seven levels, from Starter to Advanced, this impressive selection of carefully graded readers offers exciting reading for every student's capabilities.
Good
Only 1 left

He Knows Too Much Level 6 Summary

He Knows Too Much Level 6 by Alan Maley

Award-winning original fiction for learners of English. At seven levels, from Starter to Advanced, this impressive selection of carefully graded readers offers exciting reading for every student's capabilities. An English company executive in India is dismissed after he tries to uncover corruption within his company. He returns to England where his life falls apart and his marriage breaks up. He then sets out on a one-man search for the truth behind his dismissal. He turns to the rich mystery and beauty of India and is finally forced to choose between love and revenge.Paperback-only version. Also available with Audio CDs including complete text recordings from the book. Contains adult material which may not be suitable for younger readers.

He Knows Too Much Level 6 Reviews

'What distinguishes the series from all the others is the zest and freshness of the text. Where the emphasis in other series is on plain and straightforward language, Cambridge English Reading texts typically use very modern expressions and the dialogue is faster moving. This has an impact on the quality of the audio cassettes, which make for very enjoyable listening.' David R. Hill, Survey Review: Readers, ELT Journal
'It was only a matter of time before a major ELT publisher set out to challenge the market dominance of Penguin Classics in the area of readers ... CUP have hit back admirably. With something for everyone in your classes, this series is well worth investing in. In fact, it's going to be a difficult act to follow by other publishers.' IATEFL Issues
'The series breaks new ground in two respects. The first is the light and informal style of writing. It is notoriously difficult to write fluent prose using restricted lexis and syntax. Part of the secret is to use word and grammar lists flexibly; but it requires flair and a good ear to produce prose and dialogue that read so well and give such a genuine flavour of modern idiom.' English Teaching Professional
'These were a very good read: exciting fast-moving stories at all levels, and a good mixture of subjects. Most touched on up-to-date themes, such as corruption, refugees, psychology, hunger, feminism, or ecology without being prosy, or moralising.' BaNina Vivanco, SATEFL Newsletter Vol 19 No 3
'This is a well presented, authentic looking series of readers that students should enjoy. They are graded into five levels, and the accompanying cassette will be useful, especially for pronunciation audio versions are very popular with students.' Josephine Caruana, Network News, Issue 34

GOR001209533
He Knows Too Much Level 6 by Alan Maley
Alan Maley
Cambridge English Readers
Used - Good
Paperback
Cambridge University Press
1999-04-01
112
0521656079
9780521656078
N/A
Book picture is for illustrative purposes only, actual binding, cover or edition may vary.
This is a used book - there is no escaping the fact it has been read by someone else and it will show signs of wear and previous use. Overall we expect it to be in very good condition, but if you are not entirely satisfied please get in touch with us.