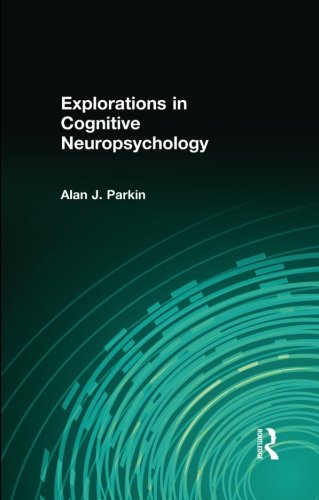 Used Price
$10.69
Free Shipping in the US
First major text on this topic since late 1980s. Begins with an overview of the subject, following with chapters on blindsight, agnosia, facial processing impairments, and the rapidly growing area of neglect.
Reviews:
Trustpilot
Very Good

Cognitive neuropsychology has now established a major place in the teaching of undergraduate psychology degrees and is an important topic of postgraduate research. The subject is also of increasing interest to clinicians because of its links with devising remediation procedures for people with brain injury. Explorations in Cognitive Neuropsychology is the first major text to appear on this topic since the late 1980s and thus introduces the reader to a vast amount of research previously unavailable in textbook format. The book is written in a lively and engaging style which nonetheless enables the reader to get a scholarly, in-depth overview of this important field. The coverage of topics is very broad-ranging. It begins with an overview of the subject including issues such as research strategy and advances in neuroimaging. Following this are chapters on blindsight, agnosia, facial processing impairments, and the rapidly growing area of neglect. The next chapter is devoted to studies of the split brain. Two chapters then cover the enormous developments in devising functional architectures of the language system from the observation of discrete language impairments. Various aspects of memory impairments are then discussed and the book ends with a consideration of frontal lobe functions. At various points the book also covers the contribution of connectionist modelling to cognitive neuropsychology.

""Professor Parkin's book will be a useful teaching tool. It is enjoyable and easy to read. I especially applaud the effort to bring together evidence from different sources to test hypotheses about cognitive processes. The orchestration of these diverse lines of investigation is the foundation of the emerging field of cognitive science. This effort is one of the primary distinctive features of the text."
-Argye Hillis, Johns Hopkins University."
"I liked this book and will certainly recommend it for the courses I teach. The material is up-to-date and readers are taken to the cutting edge of research in cognitive neuropsychology. The book is written in a clear accessible style, and with humor, and the described appear as real people with concerning difficulties."
-Elaine Funnell, Royal Holloway, University of London."

GOR001290679
Explorations in Cognitive Neuropsychology by Alan Parkin
Alan Parkin
Used - Very Good
Paperback
Taylor & Francis Ltd
1999-02-08
296
0863776345
9780863776342
N/A
Book picture is for illustrative purposes only, actual binding, cover or edition may vary.
This is a used book - there is no escaping the fact it has been read by someone else and it will show signs of wear and previous use. Overall we expect it to be in very good condition, but if you are not entirely satisfied please get in touch with us.