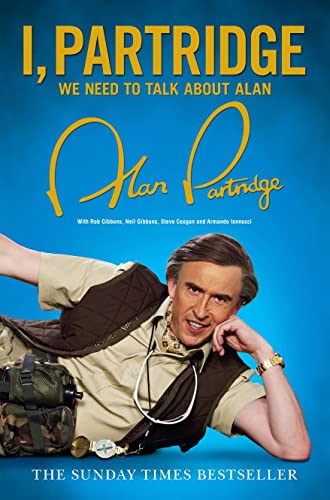 I, Partridge: We Need To Talk About Alan
by Alan Partridge

I, Partridge: We Need To Talk About Alan Summary

I, Partridge: We Need To Talk About Alan by Alan Partridge

Gregarious and popular, yet Alan's never happier than when relaxing in his own five-bedroom, south-built house with three acres of land and access to a private stream. But who is this mysterious enigma?

Alan Gordon Partridge is the best - and best-loved - radio presenter in the region. Born into a changing world of rationing, Teddy Boys, apes in space and the launch of ITV, Alan's broadcasting career began as chief DJ of Radio Smile at St. Luke's Hospital in Norwich. After replacing Peter Flint as the presenter of Scout About, he entered the top 8 of BBC sports presenters.

But Alan's big break came with his primetime BBC chat show Knowing Me, Knowing You. Sadly, the show battled against poor scheduling, having been put up against News at Ten, then in its heyday. Due to declining ratings, a single catastrophic hitch (the killing of a guest on air) and the dumbing down of network TV, Alan's show was cancelled. Not to be dissuaded, he embraced this opportunity to wind up his production company, leave London and fulfil a lifelong ambition to return to his roots in local radio.

Now single, Alan is an intensely private man but he opens up, for the second time, in this candid, entertaining, often deeply emotional - and of course compelling - memoir, written entirely in his own words. (Alan quickly dispelled the idea of using a ghost writer. With a grade B English Language O-Level, he knew he was up to the task.)

He speaks touchingly about his tragic Toblerone addiction, and the painful moment when unsold copies of his first autobiography, Bouncing Back, were pulped like `word porridge'. He reveals all about his relationship with his ex-Ukrainian girlfriend, Sonja, with whom he had sex at least twice a day, and the truth about the thick people who make key decisions at the BBC.

A literary tour de force, I, Partridge: We Need to Talk About Alan charts the incredible journey of one of our greatest broadcasters.

Customer Reviews - I, Partridge: We Need To Talk About Alan

I, Partridge: We Need To Talk About Alan Reviews

`The funniest book of the year and possibly all time.' *****Heat

`This book is a genuinely hilarious read' Shortlist

`As a parody of celebrity autobiography, it's sound; but as a sustained piece of comic writing, it's outstanding.' **** Time Out

`This should be nominated for the Booker prize...it's a really funny book but it's actually more than that...it blows my post-modern mind' David Baddiel

'I, Partridge might just be the funniest book I've ever read. Proper laugh out load moment on every page.' Richard Bacon

`This fictional memoir ... could be the antidote to the celeb biographies that clog the Christmas book market. It's as acute a spoof of the publishing sub-genre as the Alan Partridge character is of a whole tranche of crassly opinionated lowbrow broadcasters...brilliantly sustained wit.' Evening Standard

`I, Partridge is an indispensable guide to what it's like to be an all-round media personality in the 21st Century. In this, it compares very well with the finest in the genre.' **** Mail on Sunday

`The best book of the year... without peer... I urge people to go out and buy it.' Danny Baker

`A magnificent comedy creation'; `The significant celebrity book this year.' The Guardian

GOR003890168
I, Partridge: We Need To Talk About Alan by Alan Partridge
Alan Partridge
Used - Very Good
Paperback
HarperCollins Publishers
2012-04-26
336
0007449186
9780007449187
N/A
Book picture is for illustrative purposes only, actual binding, cover or edition may vary.
This is a used book - there is no escaping the fact it has been read by someone else and it will show signs of wear and previous use. Overall we expect it to be in very good condition, but if you are not entirely satisfied please get in touch with us.