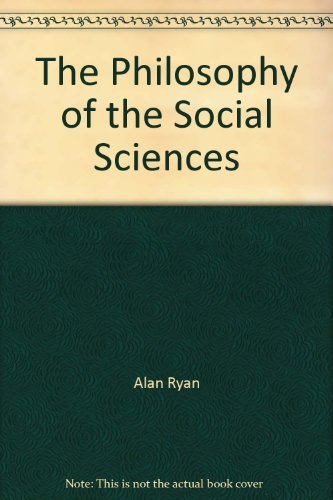 The Philosophy of The Social Sciences
by Alan Ryan

In Stock
$14.99
In the concluding chapters the role of the social sciences as ideologies is discussed, first in the context of social theorists' ambitions for a science which offers long-range predictions of social phenomena, and finally in the context of doubts about the possibility of objectivity in the description and analysis of social facts.
Very Good
Only 1 left

The Philosophy of The Social Sciences Summary

The Philosophy of The Social Sciences by Alan Ryan

Are the Social Sciences in principle a different and more dubious undertaking than the Natural Sciences? This book is an introduction to the major problems of the philosophy of social science. It covers most of the important, and sometimes controversial, topics in the present debate but demands no previous knowledge of philosophy or the social sciences. A model of explanation is developed from current philosophical analysis of the natural sciences that can with care be made applicable to the work of the social scientist.

The book begins by explaining the point of asking specifically philosophical questions - an issue on which many social scientists have come to grief. Summarising the concern of the philosopher of social science as the desire to explain rationally the scientific standing of social enquiry, it leads into an account of the nature of scientific explanation, paying special attention to the role of theories in science. The applicability of the dominant account of scientific explanation to human behaviour is shown to raise conceptual problems of an intractable kind - some of them traditional problems concerning 'free will', others contemporary problems with a bearing on social policies about crime, mental health and the enlargement of personal liberty. The intractability of these problems sets the book off on exploring the claim that social understanding is essentially non-scientific, because it involves the analysis of social meanings rather than casual regularities. This claim is seen to contain a good deal of sense - much of it well enshrined in sociological and anthropological practice - but to be misleadingly expressed. Next, the discussion turns to the argument that the proper explanation of social phenomena is 'functionalist' in character; functionalism is seen to do justice to the often-defended view that social phenomena are frequently holistically explained, but is rejected as involving anything peculiar to the explanation of social phenomena - and several self-ascribed functionalists are shown to be offering non-functionalist explanations. In the concluding chapters the role of the social sciences as ideologies is discussed, first in the context of social theorists' ambitions for a science which offers long-range predictions of social phenomena, and finally in the context of doubts about the possibility of objectivity in the description and analysis of social facts. Throughout the book every effort is made to represent conflicting views as fairly as possible; the differences within social science are emphasised in the attempt to show how no single simple account can do justice to the diversity of explanations offered by social scientists.

ALAN RYAN teaches politics and philosophy at New College, Oxford. In the past he has taught at the Universities of Keele and Essex, as well as at the City University of New York. He has written, reviewed and broadcast on a variety of topics and believes that philosophy should be made accessible to a wider audience than professionals. He is the author of The Philosophy of John Stuart Mill.

Preface.- PART 1: THE QUESTIONS THAT PHILOSOPHERS ASK.- PART 2: SOME BASIC TOOLS OF PHILOSOPHY.- PART 3: THE DEDUCTIVE CONCEPTION OF EXPLANATION.- PART 4: THE ROLE OF SCIENTIFIC THEORIES.- PART 5: THE CAUSAL EXPLANATION OF BEHAVIOUR.- PART 6: IS THE SCIENCE OF SOCIAL LIFE A SCIENCE?.- PART 7: THE SOCIAL SCIENCES AS SCIENCES.- PART 8: WHOLES, PARTS, PURPOSES AND FUNCTIONS.- PART 9: PREDICTION AS A GOAL OF SOCIAL SCIENCE.- PART 10: SCIENCE, SOCIAL SCIENCE AND IDEOLOGY.- Bibliography.- Index.

GOR010324566
The Philosophy of The Social Sciences by Alan Ryan
Alan Ryan
Used - Very Good
Paperback
Palgrave Macmillan
1970-01-01
255
B002Y78ZE0
9780333109724
N/A
Book picture is for illustrative purposes only, actual binding, cover or edition may vary.
This is a used book - there is no escaping the fact it has been read by someone else and it will show signs of wear and previous use. Overall we expect it to be in very good condition, but if you are not entirely satisfied please get in touch with us.