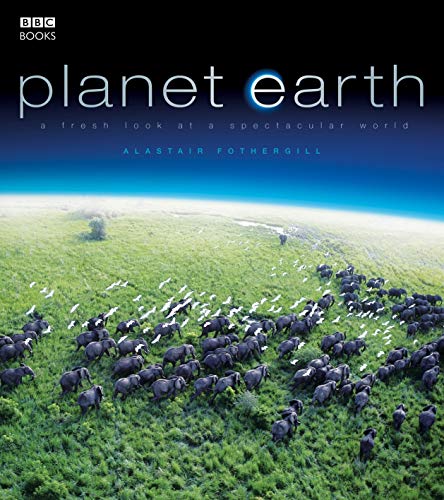 In Stock
$20.99
Prepare yourself for a spectacular tour of the world's many habitats, each possessing its own unique mood. The thread that binds them all is water - the precious element that has carved our world and makes all life possible - and only three percent of which on the entire Earth is fresh.
Very Good Good
16 in stock

Prepare yourself for a spectacular tour of the world's many habitats, each possessing its own unique mood. From the claustrophobic darkness of the Deep Ocean to the big skies of the Open Plains; the merciless, ever-expanding Deserts to the diminishing Jungles, teeming with violent life. The thread that binds them all is water - the precious element that has carved our world and makes all life possible - and only three percent of which on the entire Earth is fresh. Within each habitat, we take a journey of exploration. We find the hidden life - the animals who have yet to be extensively filmed, either through the inaccessibility of their habitat or their own elusive behaviour. Mass migration spectacles, blind cave fish, bioluminescent corals and rarely-seen large mountain cats, all beautifully captured by the world's best nature photographers. With a foreword by Sir David Attenborough, Planet Earth is the ultimate portrait of our planet, and the perfect companion piece to a truly historic television event.

"The book of the series Planet Earth is so lavish and loving, it borders on zoophilia." -- Jim Shelley * The Guardian *
"Full of unique, high-quality photographs of some of our planet's rarest and most unusual life forms as well as engaging and authoritative text" * The Bookseller *
"Lavish and spectacular, with beautifully photographed views of every kind" * The Herald *
"Absolutely mind-blowing" * The Good Book Guide *
"Illustrates and vocalises the journey in a lavish manner, depicting some of the world's greatest landforms and most remarkable wildlife with skill and pertinence.... The perfect companion piece to a truly unparalleled television experience" * Accent magazine *

Alastair Fothergill studied zoology at the University of Durham and made his first film, on the Okavango, while still a student. Alastair joined the BBC Natural History Unit in 1983, working on The Really Wild Show, Wildlife on One and the series The Trials of Life. He was appointed head of the unit in 1992, and during his tenure he produced the award-winning series Life in the Freezer. In June 1998 he stood down to concentrate on his role as series producer of the hugely successful The Blue Planet. He has also presented several television programmes, including The Abyss, and is the author of three books.

GOR001236657
Planet Earth by Alastair Fothergill
Alastair Fothergill
Used - Very Good
Hardback
Ebury Publishing
2006-10-02
312
0563522127
9780563522126
Short-listed for British Book Awards: TV & Film Book of the Year 2007
Book picture is for illustrative purposes only, actual binding, cover or edition may vary.
This is a used book - there is no escaping the fact it has been read by someone else and it will show signs of wear and previous use. Overall we expect it to be in very good condition, but if you are not entirely satisfied please get in touch with us.