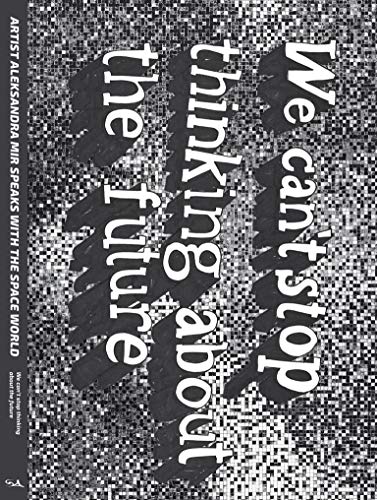 We Can't Stop Thinking About The Future
by Aleksandra Mir

Used Price
$24.99
Free Shipping in the US
The story of Alexandra Mir's Space Tapestry: Faraway Missions, with reproductions of the finished work and images from its collaborative creation with twenty-five young artists.
Reviews:
Trustpilot
Good

We Can't Stop Thinking About The Future Summary

We Can't Stop Thinking About The Future by Aleksandra Mir

The story of Alexandra Mir's Space Tapestry: Faraway Missions, with reproductions of the finished work and images from its collaborative creation with twenty-five young artists.

Inspired by the Bayeux Tapestry and the anonymous artists who depicted Halley's Comet in 1066, the Space Tapestry is a large-scale, hand-drawn monochrome wall-hanging that forms an immersive environment. Much like a graphic novel, Space Tapestry tells an episodic visual story of space travel.

Over the past three years, Mir has maintained dialogues with professionals in the space industry and academia who have informed and inspired her. The work draws on themes relating to current debates, recorded events, scientific discoveries, technological innovations and predictions of imagined futures that currently affect all our lives.

This book contains both reproductions of the finished work and images from its collaborative creation with twenty-five young artists. It also contains sixteen in-depth new interviews with a wide range of professionals working in the space industries today, providing an intimate and informative insight into the present and future of space exploration.

Customer Reviews - We Can't Stop Thinking About The Future

Born 1967 in Lubin, Poland, a citizen of Sweden and the United States, and based in London, the artist Aleksandra Mir has an international practice of twenty-five years, with numerous exhibitions worldwide, including The Space Age, a retrospective at M-Museum, Leuven, 2013, and the 34m mural Drawing Room, London, 2014. She has developed many large-scale collaborative projects on space exploration. Her most well-known project, First Woman on the Moon (1999), has been touring for seventeen years and is included in the collections of The Solomon R. Guggenheim Museum and the Tate.

GOR010807891
We Can't Stop Thinking About The Future by Aleksandra Mir
Aleksandra Mir
Strange Attractor Press
Used - Good
Paperback
Strange Attractor Press
2017-06-20
158
1907222545
9781907222542
N/A
Book picture is for illustrative purposes only, actual binding, cover or edition may vary.
The book has been read but remains in clean condition. All pages are intact and the cover is intact. Some minor wear to the spine.