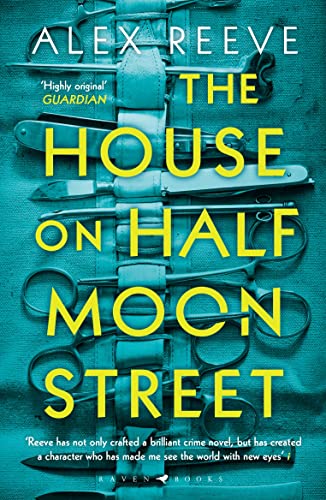 The House on Half Moon Street
by Alex Reeve

The House on Half Moon Street Summary

The House on Half Moon Street: A Richard and Judy Book Club 2019 pick by Alex Reeve

SHORTLISTED FOR THE 2019 CWA SAPERE BOOKS HISTORICAL DAGGER SHORTLISTED FOR THE 2019 POLARI FIRST BOOK PRIZE `Enthralling, exciting, extraordinary and utterly convincing. Everything a great book should be' Sarah Hilary `Wonderfully atmospheric, each page carries the whiff of sulphur and gaslight' Red Everyone has a secret... Only some lead to murder. Introducing Leo Stanhope: a Victorian transgender coroner's assistant who must uncover a killer without risking his own future When the body of a young woman is wheeled into the hospital where Leo Stanhope works, his life is thrown into chaos. Maria, the woman he loves, has been murdered and it is not long before the finger of suspicion is turned on him, threatening to expose his lifelong secret. For Leo Stanhope was born Charlotte, the daughter of a respectable reverend, but knowing he was meant to be a man - despite the evidence of his body - he fled his family home at just fifteen and has been living as Leo ever since. Desperate to find Maria's killer, he now stands to lose not just his freedom, but ultimately his life.

Customer Reviews - The House on Half Moon Street

The House on Half Moon Street Reviews

Wonderfully atmospheric, each page carries the whiff of sulphur and gaslight * Red *
From the first page of Reeve's masterful debut, we are plunged into murky Victorian London. This is a brilliantly gripping, unsettling Gothic tale of murder, identity and desire * Diva *
Highly original * Guardian *
Reeve has not only crafted a brilliant crime novel, but has created a character who has made me see the world with new eyes. I await Leo's - and Reeve's - return eagerly. * The i *
Creating a genuinely original protagonist in historical crime fiction is difficult, but Alex Reeve has succeeded ... An intriguing murder mystery and a complex portrait of a man isolated by his awareness of who he truly is * Sunday Times *
An ingenious, pacey mystery with a sympathetic hero * Irish Times *
An entertaining and ingenious psychological drama of gender identity enfolded within a dexterously plotted and deeply satisfying Victorian murder thriller. Leo Stanhope is an impulsive, infuriating and ardently honourable accidental detective driven by his passions - a vibrant, intense character for whom the ultimate mystery is himself -- Rachel Holmes
A masterful Gothic mystery full of unsettling twists, riveting turns and characters that would make Dickens jealous -- Kaite Welsh, author of The Wages of Sin
The House on Half Moon Street is everything you want from a novel - a wonderfully evoked setting, a fascinating cast of characters, a plot that turns the pages for you and beautiful, intricate writing. I loved it -- William Ryan
A wonderfully fast moving drama with a wealth of captivating characters...And yet, below the decadent charm, historical issues of women's rights are threaded so well into the plot - as is the writer's sense of tenderness when describing the desperate loneliness of feeling `other' in one's physical body -- Essie Fox, author of The Last Days of Leda Grey
It's hard to believe that this is a debut. Alex Reeve writes with confidence, insight and poise, and I was gripped from first page to last. Leo Stanhope got under my skin and has stayed there. He is authentic, engaging and utterly believable, and I felt for him at every step as he walked the streets of Victorian London. I adored this book, for its intricacy, its vividness and its compassionate heart. -- Stephanie Butland, author of Lost for Words
Enthralling, exciting, extraordinary and utterly convincing. Everything a great book should be -- Sarah Hilary
Atmospheric, heartbreaking, and so tense it took my breath away. These characters have lodged firmly in my heart - I can't wait to see where they go next -- Angela Clarke

Alex Reeve lives in Buckinghamshire and is a university lecturer. Richard & Judy Book Club 2019 pick The House on Half Moon Street is his debut, and the first in a series of books featuring Leo Stanhope. @storyjoy

GOR009533278
The House on Half Moon Street: A Richard and Judy Book Club 2019 pick by Alex Reeve
Alex Reeve
A Leo Stanhope Case
Used - Very Good
Paperback
Unknown
0
1408892715
9781408892718
N/A
Book picture is for illustrative purposes only, actual binding, cover or edition may vary.
This is a used book - there is no escaping the fact it has been read by someone else and it will show signs of wear and previous use. Overall we expect it to be in very good condition, but if you are not entirely satisfied please get in touch with us.