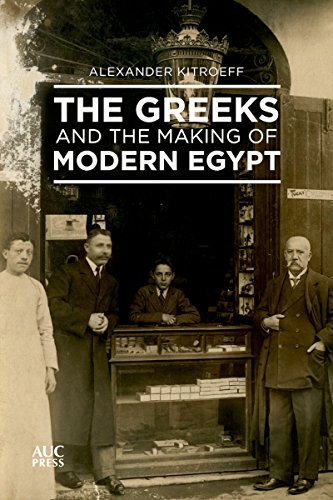 The Greeks and the Making of Modern Egypt
by Alexander Kitroeff

Used Price
$28.99
Free Shipping in the US
The story of the Greeks in Egypt from Muhammad Ali to Nasser
Reviews:
Trustpilot
Very Good

The Greeks and the Making of Modern Egypt Summary

The Greeks and the Making of Modern Egypt by Alexander Kitroeff

From the early nineteenth century through to the 1960s, the Greeks formed the largest, most economically powerful, and geographically and socially diverse of all European communities in Egypt. Although they benefited from the privileges extended to foreigners and the control exercised by Britain, they claimed nonetheless to enjoy a special relationship with Egypt and the Egyptians, and saw themselves as contributors to the country's modernization. The Greeks and the Making of Modern Egypt is the first account of the modern Greek presence in Egypt from its beginnings during the era of Muhammad Ali to its final days under Nasser. It casts a critical eye on the reality and myths surrounding the complex and ubiquitous Greek community in Egypt by examining the Greeks' legal status, their relations with the country's rulers, their interactions with both elite and ordinary Egyptians, their economic activities, their contacts with foreign communities, their ties to their Greek homeland, and their community life, which included a rich and celebrated literary culture. Alexander Kitroeff suggests that although the Greeks' self-image as contributors to Egypt's development is exaggerated, there were ways in which they functioned as agents of modernity, albeit from a privileged and protected position. While they never gained the acceptance they sought, the Greeks developed an intense and nostalgic love affair with Egypt after their forced departure in the 1950s and 1960s and resettlement in Greece and farther afield. This rich and engaging history of the Greeks in Egypt in the modern era will appeal to students, scholars, travelers, and general readers alike.

Customer Reviews - The Greeks and the Making of Modern Egypt

The Greeks and the Making of Modern Egypt Reviews

Alexander Kitroeff's magnificent book,The Greeks and the Making of Modern Egypt, is a work of great scholarly maturity and personal love. He offers a stimulating overview of modern Egypt's most populous and influential foreign community, based on many years of research, a comprehensive reading of sources, and a personal and deep connection with Egypt dating back to the late nineteenth century, when his great-grandfather emigrated from the isle of Chios and settled in Alexandria. -- Robert L. Tignor, Princeton University
A marvelously comprehensive historical study of one of modern Egypt's most important foreign communities, as rich in detail as it is sensitive to the complex nature of the community's internal structures, its adaptability in face of changing internal and external power relationships, and the nostalgia with which its surviving members now remember its sojourn in a wondrous land. -- Roger Owen, Harvard University
"This finely written book is a must-read for all those with an interest in the story of the Greeks in nineteenth- and twentieth-century Egypt and the complex and intricate relations that existed between Egyptian Greeks (Egyptiotis), the Greek Orthodox Church, and the homeland." -- Mohamed Awad, Alexandrian historian and conservationist
This is the single best book on the role of the one-time flourishing Greek community in Egypt: richly sourced, wide-ranging, and subtle and complex in its judgments, by one of the world's leading scholars of the modern Greek diaspora. -- Robert Vitalis, University of Pennsylvania

Alexander Kitroeff is associate professor of history at Haverford College, where he teaches courses on Modern European and Mediterranean history. Born in Greece, he studied in Britain, where he received his doctoral degree in history at Oxford University. His research focuses on nationalism and ethnicity in modern Greece and its diaspora, from politics to sports. He is the author of four books, including The Greeks in Egypt: Ethnicity and Class 1919-37 and Wrestling with the Ancients: Modern Greek Identity and the Olympics.

List of Figures Introduction 1. The Greeks in Nineteenth-century Egypt 2. Benefiting from British Control, 1882-1919 3. The Rise of Egyptian Nationalism 4. Debates about the Future of the Greeks in Egypt 5. The Second World War Years and the End of the Mixed Courts 6. The Greeks and the Nasser Era 7. The Greek Egyptian Diaspora: Memory and Nostalgia Notes Bibliography Index

GOR010811254
The Greeks and the Making of Modern Egypt by Alexander Kitroeff
Alexander Kitroeff
Used - Very Good
Hardback
The American University in Cairo Press
2018-11-05
256
9774168585
9789774168581
N/A
Book picture is for illustrative purposes only, actual binding, cover or edition may vary.
This is a used book - there is no escaping the fact it has been read by someone else and it will show signs of wear and previous use. Overall we expect it to be in very good condition, but if you are not entirely satisfied please get in touch with us.