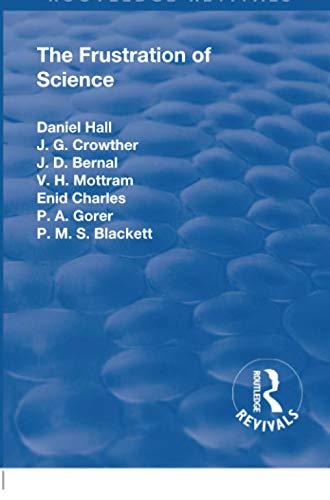 Revival: The Frustration of Science (1935) Summary

From the beginning to the end of these pages, whether we read of the wilful destruction of the products and productivity of the soil, the aerial destruction of wealth by the thousand million pounds' worth, created by somebody's labour, the embarrassing fecundity of modern technology resulting only in every conceivable form of sabotage, the anomalous position of the conscientious medical practitioner. The refusal of women to bring children into such a world, the development of the art of spreading bacterial infection as a new war technique, or the frank abandonment by modern political movements of the hope of social progress that science renders possible - from the beginning to the end of these pages the reader will find elegant examples of the sort of ruling mentality now dominating the world.

Bitter, and justifiably so, as many of the critics of science are, surely nothing bitterer could be said of it than this, that its abundance has but enthroned the wastrel. Not is the solution exactly what one of the contributors rather naively suggests, that science should look for a new master.

Sir Alfred Daniel Hall, FRS, sometimes known as Sir Daniel Hall was a British agricultural educationist and researcher. He was principal of Wye College and director of Rothamsted Experimental Station. He was elected as a Fellow of the Royal Society in 1909 and made KCB in 1918.

Foreward 1. Science and Agriculture 2. Aviation 3. Science and Industry 4. Medicine 5. The Invention of Sterility 6. Bacterial Warfare 7. The Frustration of Science

GOR010720537
Revival: The Frustration of Science (1935) by Alfred Daniel, Sir, K.C.B. Hall
Alfred Daniel, Sir, K.C.B. Hall
Routledge Revivals
Used - Very Good
Paperback
Taylor & Francis Ltd
2019-02-04
148
1138568562
9781138568563
N/A
Book picture is for illustrative purposes only, actual binding, cover or edition may vary.
This is a used book - there is no escaping the fact it has been read by someone else and it will show signs of wear and previous use. Overall we expect it to be in very good condition, but if you are not entirely satisfied please get in touch with us.