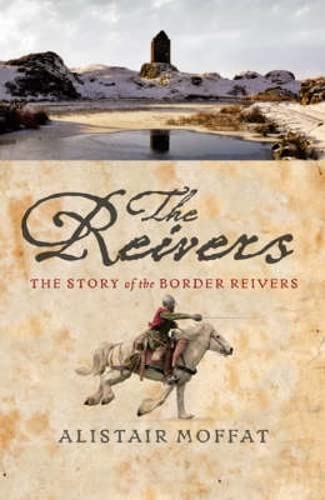 The Reivers
by Alistair Moffat

Only one period in history is immediately linked to the whole area of the Scottish and English Border country, and that is the time of the Reivers. Whenever anyone mentions Reiver, no-one hesitates to add Border. This book tells the tale of a land that was a no-man's-land but a land over which blood was shed on both sides of an invisible border.

The Reivers: The Story of the Border Reivers by Alistair Moffat

Only one period in history is immediately, indelibly and uniquely linked to the whole area of the Scottish and English Border country, and that is the time of the Reivers. Whenever anyone mentions 'Reiver', no-one hesitates to add 'Border'. It is an inextricable association, and rightly so. Nowhere else in Britain in the modern era, or indeed in Europe, did civil order break down over such a wide area, or for such a long time. For more than a century the hoof-beats of countless raiding parties drummed over the border. From Dumfriesshire to the high wastes of East Cumbria, from Roxburghshire to Redesdale, from the lonely valley of Liddesdale to the fortress city of Carlisle, swords and spears spoke while the law remained silent. Fierce family loyalty counted for everything while the rules of nationality counted for nothing.The whole range of the Cheviot Hills, its watershed ridges and the river valleys which flowed out of them became the landscape of larceny while Maxwells, Grahams, Fenwicks, Carletons, Armstrongs and Elliots rode hard and often for plunder. These were the Riding Times and in modern European history, they have no parallel.
This book tells the remarkable story of the Reivers and how they made the Borders.

'a most compelling, thought-provoking and entertaining history'

'This is a page-turning history, lucidly written, and it is enhanced by a selection of five famous Border ballads. One of the best reads of the year, without doubt'

Alistair Moffat was born and raised in Kelso. He took degrees at the universities of St Andrews, Edinburgh and London and played rugby for Kelso and his universities. In 1976 he took charge of the Edinburgh Festival Fringe as it grew into the largest arts festival in the world. He now lives in Selkirk.

GOR001861612
The Reivers: The Story of the Border Reivers by Alistair Moffat
Alistair Moffat
Used - Very Good
Hardback
Birlinn General
2007-05-25
272
1841585491
9781841585499
N/A
Book picture is for illustrative purposes only, actual binding, cover or edition may vary.
This is a used book - there is no escaping the fact it has been read by someone else and it will show signs of wear and previous use. Overall we expect it to be in very good condition, but if you are not entirely satisfied please get in touch with us.