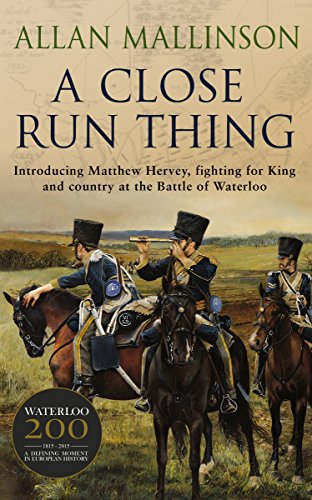 In Stock
$6.99
Waterloo, 1815As the war against Bonaparte rages to its bloody end upon the field of Waterloo, a young officer goes about his duty in the ranks of Wellington's army. He is Cornet Matthew Hervey of the 6th Light Dragoons - a soldier, gentleman and man or honour, who suddenly finds himself allotted a hero's role ...
Very Good
11 in stock

Waterloo, 1815 As the war against Bonaparte rages to its bloody end upon the field of Waterloo, a young officer goes about his duty in the ranks of Wellington's army. He is Cornet Matthew Hervey of the 6th Light Dragoons - a soldier, gentleman and man or honour, who suddenly finds himself allotted a hero's role ... Momentous times call for momentous acts: as the Napoleonic Wars escalate, Cornet Hervey faces decisions, both military and romantic, which will change the course of his life, and possibly the outcome of Waterloo... 'I have never read a more enthralling account of a battle ... This is the first in a series of Matthew Hervey adventures. The next can't come soon enough for me' Daily Mail

"'Now at last a highly literate, deeply read cavalry officer of high rank shows one the nature of horse-borne warfare in those times: and Colonel Mallinson's A Close Run Thing is very much to be welcomed.'" * Patrick O'Brian *
"'As astonishingly impressive debut...Convincingly drawn, perfectly paced and expertly written...A joy to read'" -- Antony Beevor
"'The scope of A Close Run Thing is quite breathtaking...A sustained piece of bravura writing'" * Observer *
"'The account of the Battle of Waterloo is an imaginative feat of high order, owing as much as to thorough scholarship as it does to compassion and sensibility. Brilliantly conveyed.'" * Daily Telegraph *
"'Allan Mallinson's grasp of the technical side of his subject is effortless and impressive...The portrayal of the men of all ranks is excellent." * Spectator *

GOR001227818
A Close Run Thing: (Matthew Hervey 1) by Allan Mallinson
Allan Mallinson
Matthew Hervey
Used - Very Good
Paperback
Transworld Publishers Ltd
2000-03-01
528
0553507133
9780553507133
N/A
Book picture is for illustrative purposes only, actual binding, cover or edition may vary.
This is a used book - there is no escaping the fact it has been read by someone else and it will show signs of wear and previous use. Overall we expect it to be in very good condition, but if you are not entirely satisfied please get in touch with us.