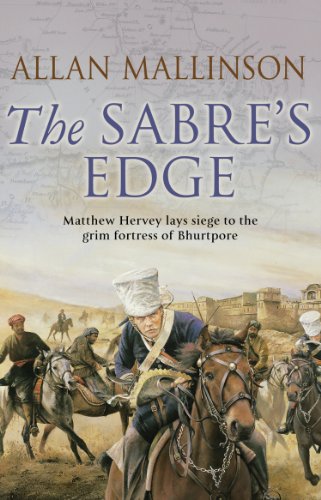 The Sabre's Edge
by Allan Mallinson

In Stock
$6.99
India, 1824Matthew Hervey and the 6th Light Dragoons are stationed in India, where conflagration looks set to flair.
Like New Very Good
Only 1 left

India, 1824 Matthew Hervey and the 6th Light Dragoons are stationed in India, where conflagration looks set to flair. The usurper prince, Durjan Sal, has taken refuge in the infamous fortress of Bhurtpore.A deep ditch, which can be flooded at a moment's notice, runs round it - and as its notorious Tower of Victory - built with the skulls of defeated men - bears witness, it has withstood all attacks made on it. Until now.Hot and dangerous work lies ahead for Matthew Hervey and his courageous troop who know their fortunes will be decided by the sabre's edge. 'Captain Matthew Hervey is as splendid a hero as ever sprang from an author's pen.' The Times

"'Splendid...the tale is as historically stimulating as it is stirringly exciting'" * Sunday Telegraph *
"'What a hero! What an author! What a book! A joy for the lover of adventure and military buff alike'" * The Times *
"We have joined for action and to see the world and that is what we get...a novel for our time, perhaps?" * Spectator *
"Hervey is the thinking man's Sharpe. Mallinson is the true heir to Patrick O'Brian" * Daily Mirror *
"'Mallinson's descriptions of regimental life and of the campaigns themselves ... crackle with detail and atmosphere ... Makes for an engrossing read, full of blood and valour.'" * Observer *

GOR010458859
The Sabre's Edge: (Matthew Hervey 5) by Allan Mallinson
Allan Mallinson
Matthew Hervey
Used - Like New
Paperback
Transworld Publishers Ltd
2004-03-01
496
055381351X
9780553813517
N/A
Book picture is for illustrative purposes only, actual binding, cover or edition may vary.
This is a used book - there is no escaping the fact it has been read by someone else and it will show signs of wear and previous use. Overall we expect it to be in very good condition, but if you are not entirely satisfied please get in touch with us.