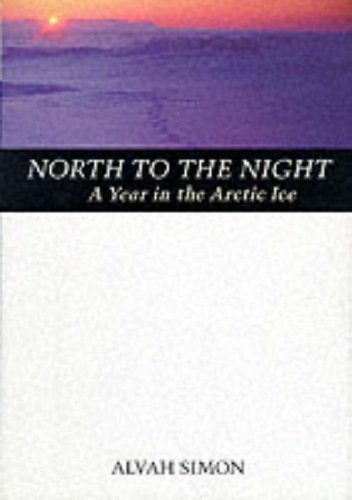 North to the Night
by Alvah Simon

Used Price
$5.99
Free Shipping in the US
After his 35-foot steel cutter, the "Roger Henry", gets stuck in the ice far above the Arctic Circle--and his wife Diana is evacuated by helicopter--Alvah Simon is left alone to survive the harsh winter. 22 color photos. 3 maps.
Reviews:
Trustpilot
Very Good

North to the Night Summary

North to the Night: A Year in the Arctic Ice by Alvah Simon

In June 1994 Alvah Simon and his wife, Diana, set off in their 36-foot sailboat, the Roger Henry, to explore the hauntingly beautiful world of icebergs, tundra, and fjords lying within one of the Earth's most remote regions -- the Arctic Circle. North to the Night recounts this remarkable, death-defying voyage, which proved to be as much a spiritual journey as an oceanic one.

Despite the careful preparation and ingenuity that had seen the Simons through a series of ordeals four months into their journey, Alvah and Diana found themselves trapped in Tay Bay, 100 miles from the nearest settlement. When Diana's father then fell terminally ill, she made the wrenching choice to be with him in New Zealand, boarding the last rescue helicopter of the season and leaving Alvah to survive the long polar night alone with his cat, Halifax.

Faced with screaming blizzards, perpetual darkness, and aching loneliness, Alvah learned that more dangerous than the beasts prowling outside the boat were the demons within. Forced to confront the awakening of his spiritual self, he emerged five months later a transformed man. His powerful, triumphant story combines the lyrical excursions of Barry Lopez with the suspense of Into Thin Air to explore the hypnotic draw of our planet's most dangerous beauties.

Customer Reviews - North to the Night

CIN000298264
North to the Night: A Year in the Arctic Ice by Alvah Simon
Alvah Simon
Used - Very Good
Hardback
McGraw-Hill Education - Europe
1998-10-01
256
0070580529
9780070580527
N/A
Book picture is for illustrative purposes only, actual binding, cover or edition may vary.
This is a used book - there is no escaping the fact it has been read by someone else and it will show signs of wear and previous use. Overall we expect it to be in very good condition, but if you are not entirely satisfied please get in touch with us.