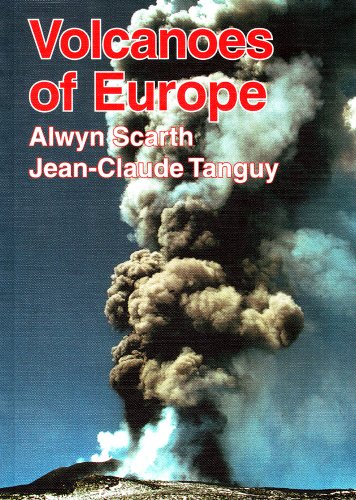 Volcanoes of Europe
by Alwyn Scarth

The volcanoes of Europe provide a fascinating array of features and processes for student, amateur and professional Earth scientists alike. They offer dramatic landscapes, intriguing geological and geographical characteristics, and compelling histories.

Volcanoes of Europe by Alwyn Scarth

Volcanoes have contributed in large part to the formation of the Earth's crust and atmosphere--and are intimately tied to the history of humanity. The most ancient civilizations of Europe have preserved the imprint of these spectacular and often terrifying phenomena. The explosion of Santorini, some 3600 years ago in the Aegean, undoubtedly inspired the Greek fables of Atlantis, the eruptons of Etna (Sicily) are the origin of the image of the forges of Cyclops and other myths, and the concept of Hades was linked to numerous volcanoes in the Mediterranean. Italy was the birthplace of the science of volcanology, and the Atlantic (Iceland and the Azores) volcanoes have given unrivalled opportunity for the study of volcanic islands recently formed. This book, both reference and guide, presents the causes, initiation, and growth of these volcanoes against a background of their environmental aspects and contemporary activity. Special attention is given to the impact on the people who live on or around them. The volcanoes of and volcanic activity in the Mediterranean basin, the Atlantic, and France and Germany are described in clear prose with a minimum of technical jargon. A glossary of volcanic terms used in the local languages is included, and the book is well illustrated with black and white photographs and maps, and an 8-page color insert.

'For students, amateurs, and professionals in the earth sciences, Scarth, an academic geologist turned writer, and Tanguy (U. of Paris 6) outline the causes, initiation, and growth of the continent's volcanoes to provide background to their recent and contemporary activity. They begin with the Mediterranean region, travel to the Atlantic, and finish with recent volcanoes in France and Germany. They include eight color plates, but primarily the illustrations are informative rather than spectacular.' SciTech Book News

Alwyn Scarth was a lecturer at the University of Dundee before concentrating on writing. Jean-Clause Tanguy teaches at the Universitie du Paris 6 and is a researcher at the Institut de Physique du Globe de Paris, Observatoire de Saint Maur, Saint Maur des Fosses, France

GOR007097428
Volcanoes of Europe by Alwyn Scarth
Alwyn Scarth
Used - Very Good
Paperback
Dunedin Academic Press
2001-01-01
256
1903544033
9781903544037
N/A
Book picture is for illustrative purposes only, actual binding, cover or edition may vary.
This is a used book - there is no escaping the fact it has been read by someone else and it will show signs of wear and previous use. Overall we expect it to be in very good condition, but if you are not entirely satisfied please get in touch with us.